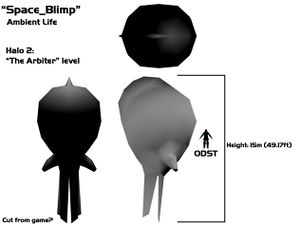 "... somebody with a clearer mind said to me “That’s the stupidest looking thing I’ve ever seen, you’ve got to take that out of there”, and I was, like, “Yeah, you’re probably right”."
— David Dunn on the fate of the space jellyfish.[1]

The space jellyfish is a deleted species of ambient life which was to be featured in Halo 2. According to Dave Dunn, the space jellyfish was planned to appear in the campaign level The Arbiter. It was conceptually based on hypothetical lifeforms which might exist in the atmospheres of gas giants such as Jupiter. Dunn was planning to have the space jellyfish make sounds which he described as "bloop bloop". However, another Bungie employee deemed the concept too preposterous, resulting in it being cut from the game.[1] However, its model is still present in the Halo 2 games files under the filename "Space_Blimp".[2]