The Reach Mapping Project aims to cross-reference both in-game and supplementary material to attempt to make sense of Reach's regional structure. The current pages for Viery Territory, Ütközet, Eposz and Alföld and potentially others do not have a clear or consistent hierarchy of locations, which reflects Halo Reach's lack of a consistent approach to detailing locations.

Thanks to several sources including the maps included with Dr. Halsey's personal journal, Halo: Outpost Discovery, the Order of Battle seen in the opening cutscene of Tip of the Spear and a Covenant deployment map seen on the bridge of Ardent Prayer, it is possible to begin piecing together a good idea of Reach's landscape and layout.

To begin with, here is a full world map of Reach, taken from the in-game texture used for the holotank of the Covenant corvette. 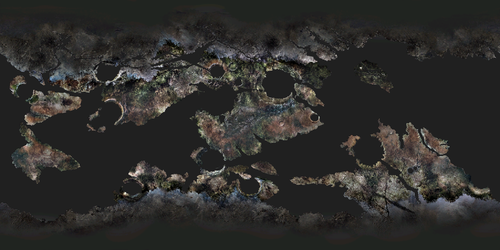 Thanks to the map provided by the Hall of History in Outpost Discovery (left), we can place the cities of Manassas, New Alexandria, Esztergom, Quezon, Sopron and Casimir. The map provided in Halsey's Journal gives us the locations of SWORD Base (marked SWO), CASTLE Base (marked CAS), Visegrád (marked VIS) and several thus-far unidentified sites.

These sources combined allows us to place a number of important locations seen in Halo: Reach and supplementary material (Halo: The Fall of Reach, Halo: First Strike, Halo: Shadows of Reach, Data Drops etc.) with a fair degree of accuracy, and begin piecing together the overall geographical structure of Reach. 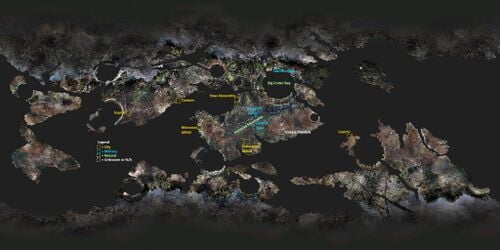 Thanks to this information, we can begin collating together other sources and references. One key in helping decipher these locales are the location paths usually seen in the cutscenes of Halo: Reach in the camera views, in the bottom right of the screen (these are provided below). Several other resources are collated below.

Several times in Halo: Reach's campaign, levels are introduced or scenes are connected with dates and locations, this is a list of them.

Based on everything above, here is the hierarchy for surface locations on Reach.

Based on the satellite image provided at the beginning of Tip of the Spear, here are the known UNSC deployments that day. Note, this only includes ones whose rough locations in relation to established locations.

Based on the hologram seen in on the Ardent Prayer in Long Night of Solace here are known Covenant deployments notated points of interest on this day. 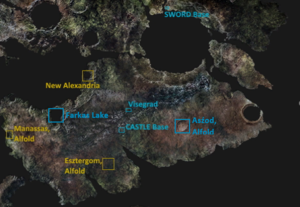 Checked boxes indicate articles that have been updated or created with new info and images.

Double check that locations and location based info is updated on various character related pages. This includes SPARTAN-II program and SPARTAN-II training pages.