Thel 'Vadam: "What is it? More Brutes?"
John-117: "Worse."
— Conversation between John-117 and Arbiter Thel 'Vadam after the Indulgence of Conviction crashes in Voi[2]

During the conclusion of the Battle for Earth there was a brief yet significant Flood outbreak that jeopardized the entire planet.

Crash landing of Indulgence of Conviction[edit]

On November 18, 2552, UNSC Marine forces led by SPARTAN supersoldier John-117 launched a desperate but determined counterattack on the Covenant garrison in the city of Voi in an attempt to prevent the Prophet of Truth from using the Keyship to activate the artifact that at the time was presumed to be the Ark, which the Prophet intended to use to destroy his enemies throughout the galaxy. Bolstered by their new Sangheili allies, led by Arbiter Thel 'Vadam the UNSC forces successfully broke through the Covenant perimeter, destroying their heavy artillery and opening a corridor for their remaining naval and air assets to launch a massive assault on the Prophet's ship. The assault ended in failure however as the Keyship's advanced armor proved impenetrable to even the UNSC's heaviest armaments, and the Portal was immediately activated allowing Truth and his remaining forces to retreat to Installation 00, the true Ark. While the battle on Earth raged, a single Covenant vessel, the Indulgence of Conviction was infected by the Flood during the battle for High Charity above the Flood-infested Installation 05 in the Coelest system; the vessel quickly broke quarantine, bypassing the Sangheili fleet and making a slipspace jump to Earth. The infected vessel arrived immediately after the Prophet's escape, crashing into Voi and unleashing a massive army of Flood infection forms, which quickly overwhelmed the city and its remaining defenders. John-117 and 'Vadam immediately rallied their surviving comrades to isolate the Flood infection, which necessitated the destruction of the crashed warship's fusion reactors to completely eradicate the threat.

"Find the crashed Flood ship. Overload its engine core. We either destroy this city, or risk losing the entire planet."
— Miranda Keyes 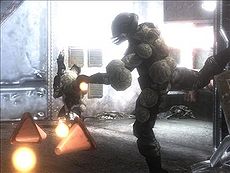 A UNSC Marine being infected by the Flood.

Realizing the gravity of the threat, Fleet Admiral Terrence Hood authorized the surviving Marine forces to use any and all means to destroy the Covenant ship and its surroundings in order to eliminate the Flood infestation. John-117 and the Arbiter then fought their way through Voi's industrial zone, linking up with any surviving squads as they found them. Several took up defensive positions, only to be killed or infected by Flood combat forms and infection forms, forcing their comrades to terminate them. The few Marines to survive initial infection rallied to the Master Chief's side in combating the spread of the Flood. By this point, most of the civilian workers on site, some of whom had taken up arms against the Covenant earlier in the day had either been killed or forced to evacuate. During the engagement at least one Marine had killed his entire squad as they risked Flood infection, and in his traumatized state contemplated suicide to spare himself the same fate. As the situation continued to escalate, the Master Chief and the Arbiter reached the edge of the the crater from which the Portal had been unearthed, at which moment they were finally reinforced by their new allies, led by Shipmaster Rtas 'Vadum.

"Hail humans, and take heed. This is the carrier Shadow of Intent. Clear this sector while we deal with the Flood."
— Rtas 'Vadum

"One single Flood spore can destroy a species. Were it not for the Arbiter's counsel, I would have glassed your entire planet!"
— Rtas 'Vadum to Lord Hood after glassing Voi to eliminate the Flood threat[3]

The operation saw Special Forces ODSTs Edward Buck and the rest of Alpha-Nine performing biohazard containment protocols in what remained of Voi, in order to ensure there was no Flood presence. None was detected.[4]