The Second Battle of Mombasa[3] was a bloody seven-day[2] engagement starting in October 2552 between the United Nations Space Command and the Covenant in the ruins and outskirts of the city of New Mombasa, Kenya, on Earth.[1] It took place after the initial Battle of Mombasa with the remains of the Mombasa Tether scattered across the battlefield.[5]

On October 20, 2552, the Prophet of Regret, having suffered heavy casualties during his forces' invasion of Mombasa, entered slipspace from within the city, unleashing a powerful explosion that caused great damage - heavy enough to sever the city's space tether, causing its catastrophic collapse onto the surrounding savanna.[6][7] The Covenant leadership held the area in great importance due to the presence of Special Operations Unggoy.[5]

Battle for the landing zone[edit]

In October 2552, the battle began on the outskirts of New Mombasa, where UNSC and Covenant forces engaged each other in a bitter fight for control of a landing zone. The UNSC never gained full control of it, always being pushed back by the Covenant whenever they seemed to secure it and vice versa.[5] Before heading into the battle Jake Courage stated, "‘I hate blood and I hate violence. So what possessed me to choose to be a war photographer? Because I’m drawn to heroes. I’m drawn to the selfless act of someone putting their own life on the line for the sake of humanity. Because amongst the horror and the madness, I like to think I can show that some good can come out of something so horrific.’".[1]

The remaining Covenant and UNSC ground forces surged forward into the city to secure whatever tactical advantage the ruins might have held. Elements from the 77th Marine Regiment battled furiously for the ruins, with snipers from both sides taking a heavy toll upon the enemy.[5] 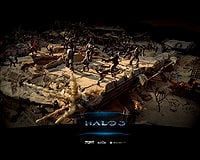 The Covenant advance is halted by the destruction of the northern bridge.

Despite a valiant defense by the Marines, they had no means to hold the bridge to the north. With Jiralhanae forces surging over it and hitting the Marines' vulnerable flanks, there was only one option remaining. On a 14:00 during a day of the battle, the order came through to destroy the bridge, thus forcing the enemy down into the valley where UNSC trenches lay to slaughter the enemy with fire from elevated positions. However, this was not the case as the Covenant forces had already begun to surge down the trenches with the destruction of the bridge.[5]

The defense of the hill was the most ferocious and bloody engagement of the battle; two thirds of the defending UNSC forces became casualties at this bottleneck. After the second bridge was destroyed, the trenches at the foot of the hill, despite a last-ditch defensive measure, came under heavy attack, garnering heavy Marine casualties.[5]

Snipers from both sides battled for control, with UNSC snipers fighting on one end of the destroyed southern bridge and Covenant Kig-Yar Snipers halting Marines outside the landing zone before being routed by UNSC infantry and tanks.[5]

During the final night of the engagement, Lieutenant John Tippett's platoon was pinned down by Covenant patrols hunting them, leading to them having to go dark, where they waited seven hours for SPARTAN-II John-117[Note 1] to reach and assist them.[8]

On the seventh day of fighting, the 506th Tank Regiment was tasked with securing the road to the southern bridge span. While outnumbered, they took their objective, leaving a path for the second wave of Marine infantry to follow.[5]

Eventually Spartan-II John-117[Note 1] arrived, and on top of "The Hill" John-117 allowed his own capture, arming an plasma grenade while gripped in the hands of a Jiralhanae Chieftain surrounded by Jiralhanae forces.[2][5] It was this moment that Jake Courage took his last photo, a photo of John-117s[Note 1] Mark VI helmet up-close.[3] During this Major Pawel Czernek was in an overturned M12 Warthog firing its M41 Vulcan.[2] 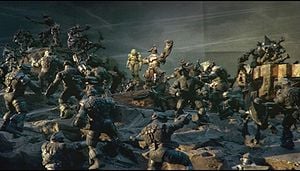 John-117 supposedly at the Second Battle of Mombasa.

Corporal James Dessen despite being killed in action, due to field reports of the 77th Marine Regiment, was posthumously awarded the UNSC Legion of Honor.[5]

John-117 was not actually killed during the battle. In reality, he was not present at this battle at all, being at the Battle of Installation 05 with the UNSC In Amber Clad,[9] and after returning on November 17, 2552,[10] went missing shortly after the Battle of Voi in November of 2552.[11]

Helped by Jake Courage's son, John, a photography exhibition of his work during this battle toured the United Kingdom.[12]

The battle was also the primary subject of the John-117 Monument. Which began creation in 2607, and was finished in 2610, where the diorama was created using historical records of the battle to make sure it was accurate, created by the hands of humans.[14]

The Second Battle of Mombasa was portrayed in the Believe advertising campaign created by Microsoft Studios to promote Halo 3. The game and subsequent media establish that John-117 never returned to Mombasa; instead, the distant city of Voi (around 140 kilometers northwest) serves as the primary battleground for control of the Portal. However, the Museum of Humanity has since been canonized in the Limited and Legendary Editions of Halo: Reach.