The Sniper Rifle System 99C-Series 2 Anti-Matériel, abbreviated SRS99C-S2 AM[5] or just S2 AM,[1] is a commonly-utilized sniper rifle in the arsenal of the United Nations Space Command. As evidenced by its designation, is part of the SRS99 Series.

The SRS99C-S2 AM is a gas-operated, magazine-fed sniper rifle chambered in the powerful 14.5×114mm cartridge.[2] Its mode of fire is semi-automatic and it is typically fed by 4-round detachable box magazines.[3][4] As befits their sniping role, they are issued with optics, such as the Oracle N-variant scope scope.[6] 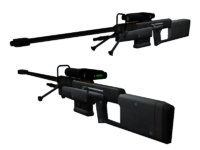 An SRS99C-S2 AM in the configuration employed by UNSC forces on Alpha Halo.

A salient attribute of the rifle is its inherent reconfigurability; the optics, stock, barrel and firing mechanism are all designed in modular sections to simplify the tailoring of the weapon to specific needs.[7] Other potential components of the weapon include gyro compensators and adaptive texture barrel sheaths.[8][Note 1] One configuration of the weapon, which was deployed during the Battle of Installation 04, featured a noticeably longer barrel and different optic than the configuration observed later during the Battle of Mombasa and the Battle of Installation 05.[3][4] The former version mounted an optic capable of x2 and x8 magnification,[3] and the latter an optic capable of x5 magnification, though both optics were smart-linked and capable of x10 magnification, and both weapons were employed firing APFSDS (armor-piercing fin-stabilized discarding-sabot) ammunition.[2][1]

During Operation: TALON, Linda-058 deployed her SRS99C-S2 AM with an alternate barrel designed to suppress firing report and muzzle-flash and, in order to compensate for the reduced muzzle velocity that came with this, re-chambered it to fire .450-caliber ammunition. Additionally, she removed any sight or scope, instead deeming to rely on an integrated link between the weapon and her HUD for the close-quarters environment. She also brought a supply of extended magazines to last her the engagement.[7] She later employed the weapon in a different configuration during the Battle of Sigma Octanus IV, this time with an Oracle scope.[9]

The appearance of the SRS99C-S2 AM is characteristic of Series 2 iterations of the SRS99 family. While bulky, its body is streamlined and smooth, somewhat simple in design, and possesses a matte-black or grey finish. The charging handle is positioned on the left side of the weapon, a tube-shaped protrusion with a metallic finish, and the ejection port is situated on the right.[Note 2] A square-shaped carry-handle is positioned above and in front of the scope. The configuration used on Installation 04 featured a solid stock joined to the base of the pistol grip, while the later version lacked this, and its stock had a prominent cutout. The barrel is locked into the upper receiver of the weapon by a prominent, rounded collar.[3][4]

As with most human weapons, to fire the SRS99C-S2 AM, the index finger is used to depress a trigger positioned towards the top of the grip. After firing, no additional action is required to chamber another round, with the weapon’s gas systems serving to cycle the bolt, ejecting the spent casing and loading a new round automatically. Holding the trigger down, however, will not result in continuous firing, making it semi-automatic, as opposed to fully-automatic. When the weapon fires, a hot cloud of fiery gas is expelled from the barrel exit and the ports of the muzzle brake, and as the projectile travels through the air, it leaves a lingering trail of smoky vapor. The expended cartridge case is ejected out of the right side of the weapon as the charging handle reciprocates, before moving forward again as the next round is chambered. This process can be repeated continuously until all available rounds are expended.[3][4]

The display of the smart-linked optic mounted on an S2-AM in Mombasa, targeting a grunt minor.

The smart-linked optics commonly employed with the SRS99C-S2 AM, when initiated, will project the view of the weapon's optic on the HUD of the user's visor, should they possess one. This targeting display indicates projected firing point of impact via a targeting reticle, remaining ammunition quantity in the weapon and loaded magazine, and level of zoom, which can be cycled between the lesser and greater magnification (generally x2 to x8 for the first configuration, though it is capable of x10 zoom,[1] and x5 to x10 for the second). The display features notches to indicate elevation, and can be toggled with a night vision filter for functionality in the dark.[3][4]

While notably bulky and of limited use in close-quarters, the SRS99C-S2 AM is considered devastating when employed strategically, firing from a secured position.[2] The 14.5x114mm APFSDS ammunition it is most frequently utilized with has extremely vicious penetration capability, being able to pass through several armored soldiers in a row. While this is of benefit when engaging resilient armored targets, it is also cause for great caution in hectic firefights.[1] The Covenant begrudgingly considered this weapon to be both accurate and powerful, noting that headshots could result in immediate incapacitation for even energy-shielded infantry.[10] 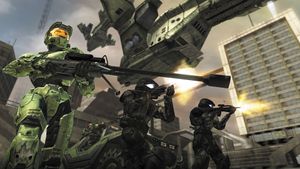 The Sniper Rifle is a precision power weapon, which fires highly damaging projectiles at near instantaneous speeds. It features two levels of zoom, and a magazine of 4 rounds. This makes it a powerhouse at long ranges, capable of killing most enemies, including enemy players in multiplayer, with one headshot, and outranging other weapons like the Battle Rifle significantly. To compensate for its power, it is a relatively rare weapon, and ammo for it is difficult to find.