From Halopedia, the Halo wiki
(Redirected from Sniper-spotter team)
Jump to: navigation, search

"Sniper" redirects here. You may be looking for the sniper rifle page or the Sniper armor permutation in Halo: Reach.

A sniper-spotter team of the UNSC Marine Corps during the Battle of Mombasa.

A sniper is an infantry specialist equipped with a high-precision weapon, typically a sniper rifle. Snipers engage targets from concealed positions or distances exceeding the detection capabilities of enemy personnel. 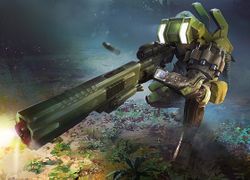 A sniper from the UNSC Spirit of Fire firing a signature-suppressed anti-materiel rifle.

All snipers in the UNSC Armed Forces receive similar training and equipment, but their method of employment varies by service and unit. UNSC Army snipers are arranged into specialized reconnaissance units at the battalion level, and operate as scouts and forward observers first, snipers second.[1] Army snipers and marksmen are trained to live off the land for years, allowing them to operate in the field for extended periods of time.[2] Though snipers provide anti-infantry and anti-vehicle capabilities to the units they work with, the primary objective of a sniper is defined as augmenting the main strategic effort of their unit by placing sensors and extending the UNSC battle network into enemy territory.[1] The Army fields cavalry scouts, while the UNSC Marine Corps has reconnaissance divisions and force reconnaissance units.[2]

Snipers may carry specialist accessories on their combat armor, such as the Supplementary bandoleer, Semi-rigid, Special Applications Rifle (Anti-materiel), which enables the wearer to carry extra sniper rifle ammunition on their shoulder.

With some exceptions, snipers of the United Nations Space Command are generally deployed as part of a two-person sniper-spotter team (also referred to as scout-sniper team). Such a team consists of two people, a sniper and a spotter. Both the sniper and spotter are often fully qualified as a sniper, but have different duties. These duties are often rotated for various reasons, such as to reduce eye fatigue of the spotter during observation and to reduce arm fatigue of the sniper.

The sniper takes the advice and commands of the spotter, changing and firing on targets. The sniper is very vulnerable to attack when sniping, which is why snipers will have their spotters providing security. The sniper, of which there is only one, is armed with a long-ranged weapon.

The spotter detects, observes, and assigns targets and watches for the results of the shot. Using a spotting scope, they will also read the wind by using physical indicators and the mirage caused by the heat on the ground. Also, in conjunction with the shooter, the spotter will accurately make calculations for distance, angle shooting (slant range), mil dot related calculations, correction for atmospheric conditions, and leads for moving targets. The spotter is also usually tasked to ensure proper communication with adjacent units, adjusting how the indirect fire and close air support will work for the team. The spotter is also charged with team security. Because of this, they are usually armed with medium to close-ranged weapons.

Some UNSC snipers, such as those serving aboard the UNSC Spirit of Fire, are accompanied by two MQ-96 Support Drones in lieu of a spotter, with one drone designed to spot targets and the other to detect cloaked enemies.[3]

In 2502, then-Corporal Avery Johnson worked with another Marine during an operation to assassinate the Insurrectionist leader Jerald Mulkey Ander on the planet Harvest. Johnson was the sniper, while the other Marine was the spotter.[4]

While SPARTAN-II Linda-058 preferred to work alone, the other Spartans always had a spotter when sniping.[5] Fred was the best spotter, in addition to his other talents.[6]

During the Battle of Mombasa, a Marine scout sniper-spotter team in Old Mombasa informed Sergeant Johnson's Pelicans that Grid Kilo 23 was "hot" with Covenant and recommended them to abort the mission.[7]

During the UNSC Spirit of Fire crew's campaign against the Banished, a unit of surviving snipers on Installation 00 led by Sergeant Allieri spotted targets within a Banished base for Kodiak artillery to clear a path for Jerome-092.[8] 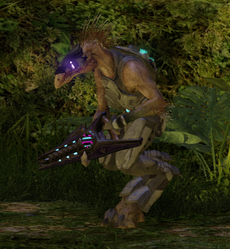 The Covenant commonly deployed Kig-Yar specialists in sniper roles, a tradition upheld by many of the hegemony's remnant groups. 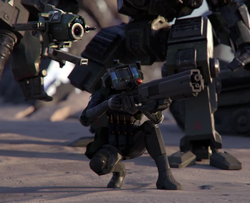 A sniper alongside a support drone.

UNSC Snipers can be built by all UNSC leaders at the Barracks. Snipers are effective against infantry, but cannot attack vehicles, aircraft, and structures. In Blitz they cost 60 energy.

The Veteran Sniper is a Blitz card available to Jerome.