The MA5B is a gas-operated automatic rifle chambered in the widespread 7.62x51mm cartridge, most often used with standard M118 FMJ-AP ammunition,[4] though also employed with shredder[6] and hollow-point rounds.[8] MA5Bs typically feed from 60-round detachable box magazines.[4] Hollow-point rounds are loaded into magazines marked with red paint for rapid identification.[8] The weapon's automatic rate of fire is 15 rounds per second,[6] but it can be limited to semi-automatic[7] or 3-round burst via a fire selector to conserve ammunition and alter firing pattern.[8]

One significant aspect of the MA5B's design is its capacity for modification. Its barrel can be adapted for use with suppressors to combat the conspicuous report of the weapon's firing, making it especially suitable for stealth fighting;[11] SPARTAN-IIs made use of this attribute during the Battle of Sigma Octanus IV.[12] Early in the Covenant War, SPARTAN-IIs also frequently employed MA5Bs with underslung M301 40mm launchers to fire HE grenades, notably during Operation: SILENT STORM[13] and the salvage operation on Netherop.[14]

A schematic view of the MA5B.

The most characteristic part of the MA5B's architecture is the accentuated shroud situated atop the barrel, which houses the weapon's integrated computer and display. While most MA5 ICWS rifles feature this to some extent, it is most prominent on the MA5B. The magazine which feeds the rifle is inserted behind the thumbhole pistol grip in a bullpup configuration, another trait typical of the ICWS series. The charging handle is an inconspicuous rounded-off protrusion on the left of the weapon's body, and the ejection port is situated on the right. The weapon's horizontal foregrip plays host to a forward-facing flashlight, bearing a prominent green button on both flanks. The barrel of the MA5B lacks any form of muzzle device (unless fitted with a suppressor).[12] The finish of the weapon is a dull grey, with a darker grey color for the foregrip, pistol grip and stock.[15] As standard, the weapon and its cowling has no optical device or ironsight,[1] leaving the only evident means by which the weapon is aimed to be via HUD-based targeting reticle, such as that of MJOLNIR Mark V,[16] or by eyesight alone.[17]

The display of the MA5B's integrated computer, showing the prominent ammunition counter and compass.

The MA5B, being a rifle, is held with the user's dominant hand on the main grip and their off-hand on the foregrip, with the stock stabilized against the shoulder. As is typical of human firearms, the MA5B is fired by the depression of a trigger positioned at the top of the main grip. When the trigger is pulled, the round in the weapon’s chamber is fired, and the weapon’s gas system harnesses some of the energy from the deflagrating propellant to cycle the bolt back into its open position.[5] As with most human weapons, the firing of the weapon creates a noticeable flash as the fiery gas of the propellant's deflagration escapes the muzzle.[4]

As the bolt travels back, the spent casing from the expended round is pushed out of the ejection port. After the bolt opens, the weapon’s recoil system pushes it forward again to strip a fresh round from the currently loaded magazine and lock it into the firing chamber. Over the course of these actions, the ammunition counter situated on the display of the weapon’s integrated computer will register the expenditure of one round from the total supply provided by the magazine and tick down by that value.[4] From this point, one of three things will occur. If the weapon’s fire-selector was set to the semi-automatic mode of fire, the trigger will have to be released and pulled again before another round fires.[7] If the weapon is set to the 3-round burst fire mode, each pull of the trigger will result in 3 successive shots.[8] If the weapon is set to fully-automatic, however, the firing action will repeat successively while the trigger is held down until the magazine is expended or the trigger is released.[4]

The MA5B's prominent integrated display features both an ammunition counter and an electronic compass. This can be assigned to highlight a specific point to orientate the user in combat or confusing terrain; during the Battle of Alpha Halo, this point was the relative direction of the gas giant Threshold.[5] Additionally, in low-light conditions, the flashlight mounted beneath the barrel of the weapon can be activated to provide illumination.[4] 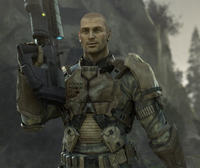 Sergeant John Forge, armed with an MA5B during the Battle of Trove.

The capabilities of the MA5B are seemingly deemed to be sufficient by soldiers of the UNSC, with John-117 regarding the weapon as "powerful."[18] While the rifle is very capable of harming foes wearing physical body armor, and even light vehicles,[19] personal energy shielding represents a significant detriment to its stopping power, as a great deal of concentrated fire from multiple MA5Bs - or an extended period of continuous automatic fire from a single rifle - is needed to overwhelm such systems.[18] When shredder ammunition is utilized, the weapon appears to be highly effective against infantry targets such as Covenant grunt soldiers,[6] and also capable of obliterating construction materials such as marble tile and wood.[20] When firing hollow-point ammunition, the weapon is highly effective against unprotected personnel, but is less likely to penetrate hard surfaces, a favorable trait when fighting on a starship and intending not to cause undue damage to items such as equipment cabinets, hulls, or viewports.[8]

The MA5B's range has been indicated to be approximately 500m in the hands of a competent shooter,[9] considered "decent" by John-117,[11] but its strength was later noted by him to lie primarily in the realm of close-quarters combat.[21] The weapon is compact enough to serve as a pilot's emergency weapon, being short enough to fit in a cockpit scabbard.[11]

One positive attribute of the weapon is the high capacity of the 60-round magazines with which it is typically used, an attribute that was comforting to UNSC marines wielding it in battle.[10] So well-liked was this attribute that even in light of reliability issues brought on by spring wear, the switch toward 32-round magazines with the later MA5C assault rifle was met with frustration by the marines of E2-BAG/1/7.[22]

When firing this weapon, it has been noted that short, controlled bursts are more accurate than continuous automatic fire. While the cyclic automatic rate of fire is high,[6] actual rate of fire in combat is dictated by the user's own proficiency at aiming, firing and reloading.[5] When the weapon is altered to mount a silencer, the report of its firing can be reduced to what can be reasonably described as a "cough."[20] Despite this, it retains a lower overall accuracy than its later cousins in the MA5 series.[1]

Sergeant Avery Johnson fires an MA5B during his escape from the compromised Flood Containment Facility on Alpha Halo.

The MA5B was in service to some extent during the Insurrection, being considered a standard weapon in September of 2525,[23] and played a significant role in the Covenant War that followed. MA5Bs were employed by various SPARTAN-IIs during Operation: SILENT STORM and the ensuing Netherop engagement in 2526.[13][14] In 2531, the marine compliment of the UNSC Spirit of Fire made use of the MA5B on Harvest, Arcadia and Etran Harborage,[24] while members of Blue Team deployed with it on their mission to the decommissioned Platform 966A the same year,[25] and again during the Battle of Jericho VII in 2535.[6] The MA5B saw particularly heavy use in 2552. On Reach, it was wielded by Orbital Drop Shock Troopers sent to engage John-117 during the live-fire test of MJOLNIR Mark V and Cortana,[26] and by the Spartans of Red Team during the defense of Orbital Defense Generators.[27] John-117 and the marine compliment of the UNSC Pillar of Autumn utilized the MA5B throughout the Battle of Installation 04,[4] and in the ensuing Skirmish over Threshold.[27] Spartan personnel during the Onyx Conflict also made use of the MA5B.[28] The MA5B remained in service as of 2559, notably being used by First Lieutenant Maks Chapov as his pilot's emergency weapon in the cockpit of an D102 Owl dropship.[11]

The MA5B in both offensive and suppressive situations remains one of the UNSC's most reliable weapon. When fired in short bursts, or even single shots, there is a significant increase in accuracy, and the rifle's armor penetrating ability makes it key for handling even the toughest of infantry, having the ability to kill an Elite in about 45 rounds in close quarters. The MA5B rifle is effective at killing light armored infantry at close-to-medium range, and the high rate of fire combined with the high ammunition capacity allows its user to spray the whole area with suppressing fire. The MA5B also gives the user an ammo count on its digital readout, as well a compass pointing toward the arbitrary magnetic "north" position. In the hands of someone who can control their trigger finger, the MA5B becomes a deadly weapon in CQB situations.

The MA5B is not without disadvantages, its main disadvantage being its horrible accuracy when fired at a range of more than forty meters. At that range, enemy infantry may be hit by a few bullets, or not be hit by any bullets at all. The MA5B Assault Rifle performs poorly against energy shields unless firing on full automatic at close range without giving a shielded infantry time to cover. In comparison to modern assault rifles it can be more related to an oversized sub-machine gun, as it is underpowered and lacks the ability to select a fire mode. The MA5B is also not the ideal weapon to use against Flood Combat forms, as Combat forms dropped by one are likely to rise again soon afterwards if not damaged with another weapon prior. A way to counter this is to kill the Combat form and with the remainder of the clip, fire at the body.