From Halopedia, the Halo wiki
(Redirected from Hornet mine)
Jump to: navigation, search

This article is about a weapon. For the VTOL aircraft, see AV-14 Hornet. 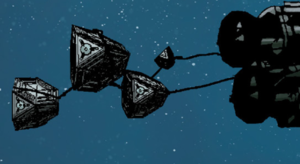 M441 Hornet Remote Explosive System,[1] commonly known as the HORNET mine, is a type of UNSC ordnance. These mines are commonly carried aboard UNSC prowlers, but not exclusively. They are stealthy, plutonium-cored, nuclear devices with a nominal yield of 30 megatons.

During the Onyx Conflict, the UNSC Dusk laid a field of HORNETs, destroying twelve and damaging four Covenant warships. This helped to prolong the survival of Admiral Patterson's battlegroup, which was facing an overwhelming number of Covenant ships at the time. The severe reduction in the number of Covenant ships allowed the UNSC fleet to score a brief victory, before overwhelming Covenant reinforcements arrived and destroyed the surviving human ships, with the exception of the Dusk.[2]

In 2558, the UNSC Nereid was carrying a number of HORNET mines when the ship lost all power in the wake of an attack from the Created. An attempt those aboard made at restarting its slipspace drive involved using the mines to power it as a sort of radioisotope thermoelectric generator. The effort was futile, however.