Assault on the Control Room (level)

The level follows the Master Chief on a mission to reach Halo's Control Room. The Covenant are deployed in greater numbers and in a more superior force than previously seen in the game, using Wraiths, Ghosts and Banshees. The majority of the level is set in a snowy, outdoor environment. Although the level seems to be natural, there are networks of tunnels and elevators built by the Forerunner that connect sections of the constructs into the Control Room.

The level is known for its variety and well roundness. It allows the player to use every weapon and vehicle in the game (except the Shotgun), and is the only level in Halo: Combat Evolved that allows the Master Chief to use a Scorpion tank. Although the level is famous for its snowy outdoor battles and large bridges, there are also a variety of indoor skirmishes, including standoffs with Sangheili Zealots. There is a mix of vehicle, long-range, and close quarters combat. The player is assisted by a handful of Marines after their Pelican crashes, but the level is mostly a solitary experience.

At the end, the Master Chief reaches the Control Room and Cortana interfaces with the computers. She is horrified to learn that Halo houses the Flood, and the weapons cache that Captain Keyes is looking for will lead him straight to the parasite. Cortana elects to stay behind, while the Chief rushes off to find the Captain.

I Would Have Been Your Daddy...[edit]

An Unggoy Minor is startled by Echo 419's arrival.

Fade in to the interior of a large Forerunner dome. Pan down to a long shaft. A single Unggoy Minor paces on an open platform.

Close up of the walking Unggoy. Other Unggoy are sleeping nearby. He stops as he hears jets, he sniffs the air, and yelps as a Pelican rises up from the chasm in front of him, screams and runs towards the door.

The Pelican hovers at the edge of the platform, the Chief gets out. He proceeds into a series of circular rooms and begins clearing them of Covenant.

The Chief emerges onto a bridge, where he discovers that it is snowing. On Legendary a Banshee fighter flies around the area.

A Pelican dropship flies over the bridge. The Covenant forces on the bridge (including the Banshee on Legendary) open fire at it. 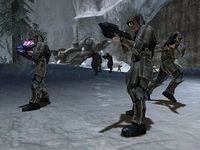 The Pelican descends to the area below the bridge.

A Sangheili Zealot runs out of a door at the opposite side of the bridge and awaits the Chief, supported by a lance of Unggoy. The Chief kills them all and enters another structure and descends to the ground level, where he returns to the canyon. A large number of Covenant have three Marines with an overturned Warthog cornered. More dead Marines lie nearby. A Covenant Wraith tank fires plasma mortars as Shade turrets and Ghost vehicles strafe the Marines.

The Chief finds a second group of Marines fighting near a Scorpion tank. With his assistance they clear the area.

The Chief and the Marines advance.

The Chief reaches a second large open area, where one Wraith hovers on the ice and another lurks on top of the cliff at the far end of the canyon. More Ghosts, Shades and Covenant infantry are also present.

The Chief enters the tunnel, killing a pair of Mgalekgolo and comes across a large cavern. More Covenant wait inside, including another Mgalekgolo pair.

The Chief crosses the cavern and exits into another tunnel, which soon turns into a rocky slope heading upwards.

The Chief clears the area of Covenant, including another Wraith and two Mgalekgolo.

The Chief comes across two more Mgalekgolo chasing after a squad of Marines, where the path switches back and goes down to a frozen river leading to the cave to the last area of the second chasm.

After the Chief engages and defeats the Mgalekgolo, a Covenant Spirit appears from behind the cliffs and drops in on the ridge he just descended from. 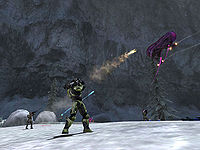 Master Chief fires a rocket at a Banshee.

The Chief nears some switchbacks leading up to final area of the second chasm.

They eliminates all enemies in the area, including a Banshee fighter and two Ghosts, and approach a door in the cliffs.

The Chief battles his way through more interior areas and across two more bridges.

The Chief kills a pair of Mgalekgolo and a mixed group of Unggoy and Kig-Yar and finds another door.

The Chief reaches a door to the third chasm. Covenant infantry patrols the rock bridge he is on, and a massive structure can be seen on his left.

The Chief fights through the bridge and another indoor area before reaching the valley's bottom.

The Chief battles his way up the pyramid and through big doors into a large corridor, where he kills all of the Covenant inside, including a Sangheili Zealot.

The Chief opens the final door. 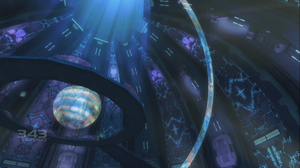 The Master Chief walks through the door and to a control panel at the center of a circular glass walkway projecting into the middle of a massive open chamber. A holographic map of Halo surrounds a smaller holographic map of the system, which shows Basis and Threshold, and Halo itself between them. Also noticeable are the red areas shown on the lands of Halo, possibly indicating where the Flood is currently spreading.

The Chief unplugs Cortana's chip from his helmet and places her chip in the terminal. A moment later, she appears above the display (In the original, data streams out from her in all directions, her eyes are now red and her body is green, shifting occasionally to blues/purples).

The Chief turns and runs from the Control Room.