From Halopedia, the Halo wiki
(Redirected from The Great Journey (Level))
Jump to: navigation, search

This article is about the campaign level. For the Covenant belief, see here. For the art book, see here.

The Great Journey is the final level in Halo 2 campaign.

In Halo 2 Vista, upon completing this level on Normal or higher will reward the player "The Great Journey" Achievement and 30 Gamerpoints.

Arbiter Thel 'Vadam, reunited with Rtas 'Vadum and a Special Operations Sangheili, heads to the "Bastion of the Brutes" to take control of a Type-47A Scarab. Defeating numerous Ghosts and three Wraiths, they reach the far end of the canyon, finding another Special Operations Sangheili as well as a Mgalekgolo pair. 'Vadum leaves the team to take control of a cruiser, while the Arbiter and the other Sangheili and Mgalekgolo continue on, freeing several imprisoned Sangheili Councilors and more Mgalekgolo. They reach a landing pad, and stop a pack of Jiralhanae from executing Sergeant Major Avery Junior Johnson, Gunnery Sergeant Stacker and Staff Sergeant Banks. While the Sangheili kill the Brutes, Johnson takes his chance and commandeers the Scarab. Forming an unexpected alliance, 'Vadam takes a Banshee and escorts the Johnson and the Scarab to Delta Halo's Control room. Johnson uses the Scarab's main cannon to destroy the Control room's door. 'Vadam then enters the Control Room and confronts Tartarus, who is trying to force Miranda Keyes to activate Halo. Backed up by Johnson, 'Vadam gets 343 Guilty Spark to reveal Halo's true purpose to everyone. However, Tartarus refuses to accept the truth and forces Commander Miranda Keyes to activate the ring. With no other choice, 'Vadam battles and kills the Chieftain. Keyes removes the Activation Index, stopping the ring from firing, but activating a fail safe mechanism in the process. Explained by 343 Guilty Spark, the fail-safe of the ring sends a signal to the Ark, where all Halos will be activated from. Meanwhile, Master Chief Petty Officer John-117 returns to Earth on board the Forerunner Dreadnought, ready to finish the fight.

Meanwhile, on the Flood-infested High Charity, the Gravemind demands information from Cortana.

Scene fades in on Arbiter Thel 'Vadam and Special Operations Commander Rtas 'Vadum, who is in a Wraith with its hatch open, conversing. The two are looking towards the Control Room of Delta Halo. The door has just slammed shut with a loud bang.

'Vadam turns to face the Control Room as Rtas 'Vadum enters his Wraith and closes the hatch behind him.

The Arbiter takes the Wraith (on Legendary, the player cannot take the Wraith) or the Spectre that drives up to him. He and Rtas 'Vadum then fight past multiple waves of Jiralhanae-controlled Ghosts, a Wraith tank and even a Phantom. A CCS-class battlecruiser can be seen in the distance.

As they travel to where a Scarab is visible, docked up on a ledge.

They clear the area, and reach the far end of the canyon.

'Vadam walks into a room where a Sangheili and two Mgalekgolo are waiting.

'Vadam and his allies fight their way through several areas guarded by Jiralhanae, Kig-Yar and Yanme'e. Eventually they reach a room where two Sangheili Councilors and a Mgalekgolo pair are being held prisoner behind force field doors.

If the Special Operations Sangheili lives at this point and follows the player into the room:

A massive fight breaks out in the detention center. The Sangheili manage to free the prisoners and together they crush the Covenant forces. The Arbiter and his allies continue through a corridor, eventually stepping out onto the platform where the discover a group of Jiralhanae preparing to execute some Marine prisoners, including Sergeant Johnson.

Gunnery Sergeant Marcus Stacker and Staff Sergeant Banks start fighting the Jiralhanae, while Johnson jumps into the Scarab and heads inside it. The Scarab starts moving.

The Sangheili and Mgalekgolo kill the Jiralhanae on the platform.

The Arbiter turns around to see the Scarab's main cannon aimed at him.

Cut to a close-up of 'Vadam.

Two Banshees arrive and their Sangheili pilots jump out.

'Vadam does so, Johnson fires the Scarab's main cannon and destroys an enemy Wraith.

If the player still stalls:

If the player moves when Johnson is counting:

If the player turns back:

The Scarab's cannon fires, destroying the Control Room's door. A hostile Phantom lands and deploys a Wraith beside the Scarab. 'Vadam destroys the Wraith and flies toward the Control Room. (If 'Vadamee does not have a Banshee than a friendly Sangheili will land one on the beach near the Scarab).

'Vadam lands his Banshee and enters the Control Room. He runs into a pack of Jiralhanae, including several Jiralhanae Honor Guardsmen.

(Alternatively, the Jiralhanae might say "them" instead of "the Arbiter")

'Vadam either kills the guards or sneaks past them, then heads into the main chamber of the Control Room.

He slams the Index on the console, which flashes red lights.

Tartarus grabs 343 Guilty Spark and jerks him around.

Tartarus lowers 343 Guilty Spark to see Johnson standing next to 'Vadam. He holds a Beam Rifle and aims it directly at Tartarus.

Tartarus barks a command, and the Jiralhanae back off.

Close up on 'Vadam, he lowers his head in sadness. Johnson lowers his Beam Rifle and looks on to the disillusioned Arbiter in acknowledgement. 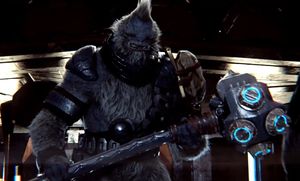 Tartarus activates Installation 05 and readies himself to kill the Arbiter.

Tartarus pauses, considering the Monitor's words, but quickly makes up his mind and throws 343 Guilty Spark at Johnson's head, knocking him down. He then grabs Keyes' hand and forces the Index into the console.

Tartarus grabs his hammer as his energy shield turns on. Miranda jumps out of the way (In the Anniversary, Tartarus throws her aside).

The main platform at the center of the Control Room splits into three as Halo charges up, emitting a massive beam of energy.

Sangheili reinforcements show up and wipe out the Jiralhanae Captains. Tartarus jumps to the central platform. The Sangheili pursue him. Johnson hangs back, firing on Tartarus with his Beam Rifle. Commander Keyes stands on one of the rotating platforms, 343 Guilty Spark follows her.

Halo's Control Room, now fully activated by Tartarus as it prepares to fire.

After the Arbiter scores a hit on Tartarus for the first time, Tartarus slams his hammer on the ground.

If the fight goes on long enough, Guilty Spark and Keyes will continue to argue:

Johnson knocks down Tartarus' shield for the fourth time:

Johnson knocks down Tartarus' shield for the fifth time:

Keyes jumps onto a rotating platform, ducks to avoid one of the other platforms passing right above her, jumps onto the main platform, and grabs the Index. The entire room shakes, making Miranda hold the Index up to her chest in fear.

Cut to exterior of the Control Room. All the built up energy fires into space.

Cut to Halo's exterior, a large pulsing ball of energy is being formed in the center, the shot from the Control Room reaches it, the ball glows, explodes, then dissipates.

Cut to interior of Control Room, which seems to be running on emergency power, as many of the lights are dimmed or not functioning. Keyes stands in front of a holographic depiction, Johnson rides 343 Guilty Spark to her.

343 Guilty Spark interfaces with the hologram, it depicts the seven Halos, a red message points to one ring (Installation 04, which has been destroyed).

343 Guilty Spark informs Johnson and Keyes of the current status of the Halo Array after the shutdown of Delta Halo.

Keyes puts a hand on his shoulder.

343 Guilty Spark is truly baffled by the humans' supposed ignorance.

'Vadam comes up behind Johnson and Miranda Keyes.

The Forerunner Dreadnought arrives at Earth amidst the ongoing space battle for control of the planet.

Fade in on the Forerunner Dreadnought exiting slipspace, and heads straight to Earth. Covenant and UNSC ships are engaging each other.

Fade in on the interior of the Forerunner ship, John-117 listens in.

Cut to Cairo Station's bridge, everything looks damaged. (In the Anniversary version, the bridge is intact and Lord Hood stands at the main display screen as station personnel scramble to their stations.)

The Chief returns to Earth to finish the fight.

Fades in on the Flood-infested High Charity.

A Flood spore floats through the air, the camera pans off to the walkway outside the Council Chamber.

Cut to a damaged door that keeps trying to close, Gravemind's tentacles creep through.

Cuts to the Council Chamber, Gravemind's tentacles reach across.

Cortana's hologram appears, she holds up her hand, the tentacles stop and move off.

Open to end of the Prologue. Thel 'Vadam is facing away from Jameson Locke. 'Vadam looks up in response to a voice from the loudspeaker.

'Vadam turns to his Swords of Sanghelios.

The Swords of Sanghelios growl and raise their Type-25 plasma rifles. Cut to Locke, who nods at other members of Fireteam Osiris: Holly Tanaka, Edward Buck, and Olympia Vale. The Spartan-IVs turn around to face the Lich's door. 'Vadam and his Majors join them.

The two of them look at the door in front them.

'Vadam, Locke and their respective forces preparing to fight together.

Locke cocks his BR55 battle rifle. Cut to the outside of the Lich's door as it fully opens. Locke takes aim and 'Vadam activates his Type-1 energy sword. Cut to black. 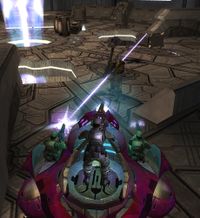 A glitch spawns multiple Johnsons during the fight against Tartarus.