The M555 Electromagnetic Launcher (M555 EL),[1] known simply as the Gauss cannon is a portable turret in use by the UNSC Armed Forces, specialized ONI units, and private corporations such as Liang-Dortmund after the Human-Covenant War.[2]

The M555 Electromagnetic Launcher (then known as the X555 Electromagnetic Launcher Advanced Technologies Testbed) was first tested in classified operations during the Requiem Campaign, utilizing a hybrid of existing technologies and Covenant-derived pulsed power systems. The implementation of the new asychonous linear-induction motor and rail channels has proven itself in testing, and development costs has stayed within budget,[1] though its precise mechanisms remain highly classified.[3] Even with the new additions, the coilgun has seen little improvement in armor penetration from its predecessor, the M68 Gauss cannon. Misriah Armory promises that up-scaled versions of the new coilguns suitable for installation on armored vehicles and aerospace vehicles will conclusively prove the value of moving to a new architecture.[1] 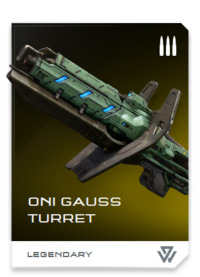 When detached, the M555 is loaded with 9 slugs. Carrying the turret decreases the player's speed and maneuverability to the point where he/she is invisible on the motion tracker unless the weapon is fired. Look speed is also drastically increased in comparison to other weapons.