This article is about the headquarters for the law enforcement. For other uses, see NMPD (disambiguation). 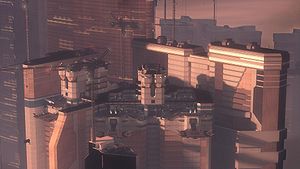 NMPD Headquarters was the command-and-control center for the New Mombasa Police Department, located in the Tanaga district of New Mombasa, Kenya, right next to the Vyrant Telecom skyscraper. The building's top floors had several air pads for NMPD's Pelican dropships. The building's Chatter lines are provided by Atlas Communications Corporation.[1]

During the Battle of Mombasa, an angered, corrupt ex-cop, Marshall Glick, took control of the lobby with an Assault Rifle and killed several cops. He then took two people, Sadie Endesha and Mike Branley, hostage for a while before a SWAT team arrived and killed him. They then forced the duty officer to reactivate the Superintendent.[2]

Later in the battle, ODSTs Kojo Agu and Edward Buck made their way to the top of the building, avoiding Covenant troops on their way up. After a Pelican carrying their squad mates was shot down, they fought their way through the upper floors to a crane holding a metal girder. Crossing the girder lead them to a separate building that was under construction nearby, abandoned by the time of the Pelican crash.[1]

The Building is divided into east and west. The East portion features four smaller lobbies. East Lobby 1 was for the Operations Bureau. East Lobby 4 was for Support Services. The Eastern portion also contains one large, central lobby, which divided East Lobby 2 and East Lobby 3. It was composed of the East Cadogan Wing and the East Uratanke Wing. The building's Eastern wing's top floors had several air pads for NMPD's Pelican Dropships.[1] The 14th floor of the building is emergency communications and a propaganda broadcasting station.[2]