From Halopedia, the Halo wiki
< Sangheili
Jump to: navigation, search

Were you looking for the article on the Sangheili species?

Different incarnations of the Elites as they appear in the main Halo games.

The Sangheili serve as an enemy in most of the Halo games, and as an ally in Halo 3. Depending on their rank, Sangheili warriors are amongst the hardest opponents encountered in games, challenged only by the Brutes and Hunters due to their skill and tactical ability, and even the lower-ranked warriors can be very dangerous.

Sangheili warriors are often considered to be the most skilled and capable species in the Halo series, and are only equaled by Hunters in Halo 2 and Halo: Reach. However, despite the tactical skill and maneuverability, the Elites are more than capable of displaying, it should be took into account that their code of honor gets in the way of this. Meaning that often in battle they frequently forget to take cover, even whilst their shields are down leaving them very vulnerable to fire from ranged weapons like the Battle Rifle or the Carbine. Use this to your advantage by combining fire with your AI Marines and your chances of taking one down will be high. Also, depending on the weapon you have and the rank of the Sangheili, it can be increasingly difficult to attack an Elite efficiently. The best way to do so is to judge by their rank and weapon. For example, if you come across a group of Minors or Majors being led by an Ultra Elite, it would be best to take out the Ultra first, as he is the strongest enemy present.

Using the more powerful weapons on high ranking Elites instead of lower ones will increase the odds of survival drastically, since it is less difficult to take down a Minor than an Ultra. If that Ultra is wielding a Plasma Rifle, then he is effective at long range, as such it is best to zip in and out of cover until you are close enough to maybe throw a grenade or increase the accuracy of your weapon. If he is charging at you or attacking someone else with an Energy Sword, engage him at long range with precise head-shots to bring down his shields and kill him without getting too close. Taking out a leader will effectively cause the other Elite members of his platoon to become confused, but not near as much as with Grunts.

Although Elites are most commonly seen with Energy Swords, Plasma Rifles and Needlers, because of their strength and versatility, Elites can utilize any weapon in the field of battle, human or Covenant, though most Elites would rather die than use a human or Jiralhanae-oriented weapon. Fred-104 theorizes that the Elites follow an edict of the Prophets that states that they should not use human weapons, based on his own sightings of Elites happily dying rather than pick up a fully loaded MA5B assault rifle at their feet. The Brutes however do not behave in a similar manner, even attempting to steal FENRIS nuclear warheads during the Battle of Earth.

The Arbiter, it appears, has no particular objection to sullying his already fraudulent honor with a human weapon, and has even shown interest in human weapons before becoming Arbiter. Most other Elites will use a human or a Brute weapon if it is given to them by the Arbiter, although usually with a derogatory remark (with some exceptions like the Spartan Laser or Rocket Launcher), such as, "Bah! Even as trophies, these weapons are worthless!", "Really??", or even "Worthless piece of crap!" However, in the hands of an Elite, any human weapon can be deadly. Elites can hold a Rocket Launcher with one hand due to their superior strength, unlike normal Marines or even SPARTAN IIs. Their marksmanship is easily comparable to a skilled Marine and they can quickly kill any opponent from afar with their skill in long-ranged combat, as well as being extremely deadly in close quarters with energy sword equipped warriors being even deadlier. Thanks to their armor and increased musculature they can survive attacks that would kill a normal human soldier, even with their personal shields down.

They will also use human vehicles such as a Mongoose, or a Warthog. In Halo 2, on the level Metropolis if left alone, the Elites will kill Gunnery Sergeant Stacker in the Gauss Warthog, take control of the Gauss cannon, and start firing at the player.

Despite their advantages, Elites also have some vulnerabilities:

Zealots are significantly more challenging to fight than other Elites. In Halo: Combat Evolved, Zealots are known to wield Energy Swords and Plasma Rifles. The rifle wielding ones shoot for longer periods (to the point of overheating their gun) while the sword wielders tend to hunt their quarry. They also have powerful shields that are twice as strong as those of a Major Elite (in Halo: Combat Evolved, they can survive a rocket on Easy). They are more agile than regular Elites and are harder to run over with vehicles. They constantly weave between objects to avoid incoming fire. Zealots are extremely dangerous in close quarters and should be dealt with promptly, preferably while they are still reasonably at a distance. They are a forceful, incredibly intelligent, and deadly foe to be reckoned with, especially on higher difficulties.

The best way to deal with a Zealot is to either stick them with a Plasma Grenade (otherwise they will attempt to evade or sidestep it during their pursuit) or to attack it from long range, as they are deadly in hand-to-hand combat because of their Energy Sword (and in Halo: Combat Evolved can kill the player with one hit from an Energy Sword in anything higher than Easy difficulty). In Halo: Combat Evolved, a Zealot would pause for a moment and become "enraged" when it got too close to the player (similar to the Brute berserkers in Halo 2), after which it would almost endlessly pursue him. This berserking afforded the player a few precious seconds to deliberate between "fight or flight". Needless to say, it is inadvisable to stick it in this situation. It can be made to temporarily call off it's pursuit by meleeing/shooting it while evading it's swing (which will cause it to do an evasive maneuver) or by simply outdistancing it and hiding long enough. It's entirely possible to defeat it using only frontal beatdowns.[1]

In Halo 2, it is possible to side step and assassinate a Zealot, or any sword wielding Elite. This is actually possible in Halo: Combat Evolved if one stands to the right/left of the Zealot's back during its berserk animation and moves in the other direction when he starts turning around to face you. One can also engineer this situation just about anywhere by stunning it with an overcharged plasma pistol shot, provided you're on flat ground and stay clear away from walls. In Halo 2, one can sometimes avoid taking damage from horizontal swings with a well-timed crouch. Due to their strong shields, it is advisable to use heavy weaponry, such as the Sniper Rifle or Rocket Launcher, if they are available. The M6D pistol is only moderately effective, taking 16 head shots to kill a fully shielded Zealot on Normal difficulty. The Needler is both common and extremely effective, due to the fact that 7 rounds will kill most enemies and the weapon's large magazine.

In Halo 2, they do not use Overshields and their shields are as strong as those of a Major Elite and Special Operations Elite, but they are a lot smarter and tougher. They are still very deadly in close-quarters, however in Halo 2, their sword animation has been changed to being "more realistic" in the sense that in Halo: Combat Evolved, a sword swing had a huge area of effect, and it was impossible to dodge a swing. In Halo 2, it is possible to sidestep, and assassinate a Zealot, or any other elite with a sword. When the Zealot is swinging, quickly step to the side and behind him, than melee him, which results in an assassination, and an instant kill. This is the quickest and most effective way of dispatching Zealots, or other sword wielding Elites. It is also more risky however. Their armor without Energy Shields are much thicker (although it makes it slower) than that of Major and Minor and can sustain more damage. In addition to the tactics mentioned in the preceding paragraph, dual M6C Magnums can be very effective at close ranges so long as you stay outside of their sword's reach. Dual Needlers are also effective. Also, Zealot AI is noticeably different in Halo 2; Zealots are always found wielding Energy Swords, ceremonial weapons befitting their high rank.

Another fact that should be known is that Zealots will never, under any circumstances, ride in or drive a vehicle. If a player tries to give them a chance to get in one, such as in Uprising, their animation will glitch and they will start to walk toward the vehicle and turn around, they will then keep doing this. They will continue to follow the player, however.

This is the only Elite variant that will spawn when scripted to, independent of difficulty setting.

Due to the constant upgrading of the Halo series from the Macintosh to the Xbox to the Xbox 360 below shows a list of changes to the Sangheili species from each Halo game.

Changes from Halo 2 to Halo 3[edit]

Changes from Halo 3 to Halo Wars[edit] 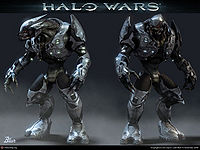 An Elite render from the Halo Wars trailer.

Changes from Halo 3 to Halo: Reach[edit]