This article is about the level. For the location, see Quarantine Zone.

Quarantine Zone is a Halo 2 campaign level, which follows up immediately from the end of Sacred Icon. The Arbiter, Thel 'Vadamee, must battle his way past Forerunner Sentinels and vehicle-using Flood to reach the Library's Index Chamber.

A Phantom moves forward over the camera, stops, then moves off screen. Arbiter Thel 'Vadamee and Special Operations Commander Rtas 'Vadumee are meeting on the snow below. Multiple Special Operations Sangheili are gathered around them.

Sangheili roar and growl in agreement

'Vadamee looks to his left at the entrance ahead.

Objects in Mirror Are Larger Than They Appear[edit]

An Enforcer, along with some Aggressor Sentinels enter through the large door in the wall ahead.

The teams pass through the tunnel and enter the structure within, they see Flood combat forms riding Ghosts.

The team destroy the Flood-driven vehicles as well as several Enforcers and Aggressor Sentinels. They continue and find an unmanned Warthog with dead human bodies around it.

In a lower area, a Scorpion tank, another Warthog and several more Ghosts all under Flood control do battle with another Enforcer, while a Flood-controlled Wraith lobs plasma mortars from across the gap. 'Vadamee and his team eventually clear the area.

As the Arbiter leaves the structure, a human controlled Pelican with a tank attached will fly overhead, firing at several Aggressor Sentinels clustered ahead, and occasionally at the Arbiter's team as well as the Flood.

The team eventually clear the area, after dealing with several Enforcers and an onslaught of Flood combat forms. They leave through a door on the lower level.

If all Sangheili allies are dead:

The Arbiter drives through a valley of Flood-controlled Wraiths, with Enforcers rising and falling into and from the pits in the center. Dodging several combat forms wielding heavy UNSC weapons, the team continue through a tunnel ahead, and the crashed Sentinel Constructor Factory comes into view. Battling a large number of Forerunner constructs, the team eventually made it into the factory through a tear in its side. The team is forced to fight its way through the stricken constructor factory, under constant attack from Sentinels and Flood forms. Eventually the team make it back outside where they find an abandoned Scorpion Tank and other UNSC supplies being guarded by the Flood. The surviving team go through a short tunnel and enter a large valley that is filled with Flood forms and Enforcers. A Covenant Phantom swoops in to drop off a Spectre along with Rtas 'Vadumee and another Special Operations Sangheili to aid the Arbiter.

The Arbiter fights through the valley and reach the entrance to the Library, where a Flood-controlled Scorpion Tank and Wraith face off with Enforcers. Flood are guarding the entrance with multiple machine gun turrets. The Arbiter and his allies eventually defeat them all.

They enter a tunnel and find a Gondola on the other side.

Thel 'Vadamee and Rtas 'Vadumee are running to the control panel of the gondola. The Arbiter is about to activate the drive switch until they hear the grinding and whirring noise of another gondola approaching the Library.

Flood screeches echo through the air. 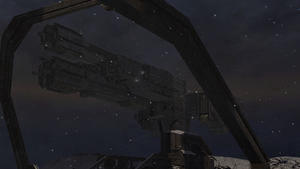 Rtas 'Vadumee takes off. 'Vadamee turns back to the control panel and activates the gondola with a soft punch.

The gondola starts moving, and Tartarus's Phantom hovers above it.

The entrance, in the shape of a circle, rotates, then opens in four-quarter pieces.

Up ahead is a ledge, where multiple Flood combat forms wait to ambush the team.

The combat forms leap down onto the gondola, forcing the team to defend themselves. As the gondola continues moving in and up.

Tartarus flies his Phantom to the Gondola the UNSC forces are riding on, greatly decreasing the Sangheili's support fire. The gondolas enter a tunnel leading up. Masses of Flood combat forms begin to attack the team through holes in the gondola.

The Gondolas exit the tunnel as the second wave of Flood has been defeated.

Tartarus flies his Phantom away again, and the Sangheili discuss the situation.

The Gondola draws closer to the Library's entrance.

Once the Gondola reaches the entrance.

Miranda Keyes reaches for the Index, floating in its container inside the Library.

The remaining Sangheili gather at the Gondola's exit.

(Note: If there's only one Sangheili left alive, he will say both lines one after the other.)

Flood infection forms crawl across the floor as the Arbiter enters the Library. The hallway is littered by a multitude of dead Marines and combat forms, and blood smears the ground.

The Arbiter locates the entryway to the Icon.

Dolly-shot of the center of the Library, where the Index is floating in a container similar to the one on Alpha Halo. Commander Miranda Keyes (who is carrying an SMG in the Anniversary) is approaching what appears to be a Flood tentacle, most likely the Gravemind's (in the Anniversary, it's a power cord from the Enforcer on top of it), hanging off of some Enforcer wreckage.

She holds onto the tentacle/cable, (in the Anniversary, she sets aside her SMG), and reaches for the Index. The container whirs, clicks, then releases the Index. She grabs it.

Keyes climbs back onto the floor.

Cut to wreckage from Johnson's POV. A cloaked hostile leaps with little noise. Johnson sees the movement and aims his battle rifle.

Johnson opens fire, but misses. The cloaked hostile gets close enough for Johnson to club it twice with his battle rifle, but with no effect. The attacker is revealed to be Thel 'Vadamee who grabs Johnson by the shoulders and sets him straight on his feet. He stares Johnson in the face with anger.

'Vadamee growls, and hits him with a head-to-head clash, knocking Johnson down and out. 'Vadamee looks up to see Keyes.

She fires, and bullets light up 'Vadamee's shields. 'Vadamee dashes for nearby cover, his shields drained as he reaches a piece of wreckage.

'Vadamee takes advantage of Keyes' distraction and leaps high from his cover, his shields flickering from the previous shots. He lands right in front of Keyes and slaps the SMGs out of her hands. She is about to react when a shock surrounding her whole body flickers, and pulls her away from 'Vadamee.

Johnson walks slowly, watching for any enemy in sight. He aims his battle rifle around, shining the mounted flashlight into the darkness. Suddenly he hears heavy footsteps on the right. He spins around just in time to see Thel 'Vadamee jumping at him.

Johnson fires his battle rifle several times, hitting 'Vadamee, whose shields deflect the incoming fire. Johnson dodges out of the way. 'Vadamee lands and takes a swing at Johnson. The Sergeant blocks the strike with his battle rifle, but is knocked back by the force of the blow.

Sergeant Johnson stares down the Arbiter after being disarmed.

The Arbiter takes another swing at Johnson, who, again, manages to block the attack with his battle rifle. Johnson rams his elbow into the Arbiter's chest, driving the Sangheili back a couple steps. He then swings his battle rifle at the Arbiter, but 'Vadamee knocks the weapon out of his hands with a single swipe.

Before Johnson can recover, the Arbiter grabs him by the throat and forces him up against a wall.

'Vadamee growls and throws Johnson to the floor. He then starts to approach Johnson when submachine gun fire lights his shields up. Scene rotates to the left, revealing Miranda Keyes firing her submachine gun.

'Vadamee dashes for nearby cover as Keyes continues firing at him. He disappears from her sight.

'Vadamee takes advantage of Keyes' distraction and leaps high from his cover. He lands right in front of Keyes, who reacts by firing her SMG at point blank range. The Arbiter grabs the barrel of her weapon with one hand and forces it away from him. He then wrenches the SMG out of Keyes' hands with such force, she is thrown to the floor. Miranda starts to crawl away when a shock surrounding her whole body flickers, and pulls her away from 'Vadamee.

Cuts to Tartarus, who is using his personal gravity hammer, the Fist of Rukt on Keyes. She lands flat on his shoulder unconscious. He catches her in his grasp.

'Vadamee has a hand on his side, where he was shot when his shields were drained.

Bloodied and betrayed, the wounded Arbiter is unable to resist Tartarus as his troops seize the Index and their human opponents.

Wide-shot of two Jiralhanae aiming their Brute Shots at 'Vadamee. The Arbiter stares at them in disbelief.

Cut to another Jiralhanae dragging the unconscious Johnson, with Tartarus firmly placing Keyes on the same Jiralhanae's shoulder

Close-up of side-shot of Tartarus

Slow zoom in on 'Vadamee. He jerks his neck up in horror.

Tartarus releases a blast from his hammer which sends 'Vadamee falling into the pit below with one gravity shock.

Cuts to black and level ends.