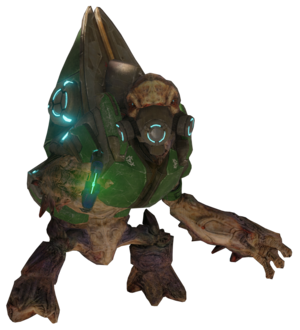 A Unggoy Heavy within the Covenant.

Heavy is a specialist combat role within the armed forces of the Covenant empire and its remnants.[2] The role is most typically held by the Unggoy as well as the Kig-Yar.

The Heavy class is composed of experienced and skilled formidable warriors capable in a variety of combat, which are served as heavy weapons experts and are designated for combat support, ground assault, defense, recon, boarding, and as well the use of heavy weapons, turrets, and some vehicles.[3]

The role is typically held by Unggoy, although the Kig-Yar (at least part of Jul 'Mdama's Covenant) can also held this rank. Heavies can be distinguished by their green-colored harness.

Augmenting many individual Unggoy detachments is the battle-hardened Unggoy Heavy class, composed of experienced and formidable Unggoy warriors, who are often fully capable of engaging light armed vehicles effectively.[4] Heavies are used to engage high-tier enemies through the use of augmented armor, explosives such as the fuel rod gun, and Methane Wagons' plasma cannons.[5][6] Perhaps most noticeable of Unggoy Heavies is their favoring of the brutal fuel rod cannon, making encounters with even just one potentially dangerous.[4]

The original Unggoy Heavies wore distinctive sage-green armor, typically with a full-face methane breather and a cylindrical methane tank on their back, similar to the Ultra. Their armor provided significantly more protection than that of a Minor or Major, but it wasn't nearly as strong as an Ultra's or a Special Operation infantry in terms of durability.[7]

The Unggoy Heavies of Jul 'Mdama's Covenant wear a helmet with full-face protective rebreathers, enhanced optical sensors with optics articulators, and ultra-dense battle harnesses that has a slim-stock tank with analog eye sockets of Unggoy predators. The harness is issued in orange, blue, silver, green, and magenta.[4] The combat harness also allows for the Heavies to use the methane tank as a makeshift thruster pack, allowing for easy access in various terrains.[5][6] During the Second Ark Conflict in 2559, Unggoy Heavies serving within the Banished were heavily augmented by machinery on Installation 00, and were led by the Shadow Master of Buwan, who joined Yapyap's rebellion against the Banished leader Atriox.[8]

Generally operating in a support role amongst Kig-Yar trackers and scouts, the Kig-Yar Heavies are the most experienced and skilled of their species, meant to typically deployed to support trackers and scouts and participate in boarding actions.[9][4][10] The combination of speed, agility, resistance, and firepower make the Kig-Yar Heavies a force to be reckoned with.[4]

Kig-Yar Heavy troopers are equipped with armor that provides excellent protection, and wears a helmet contrary to most Kig-Yar infantry troopers.[4] Its design is intended to reflect the Kig-Yar's station and intimidate enemies.[4] The Kig-Yar Heavies wield and an orange point defense gauntlet, allowing them to provide substantial opposition for any foes who encounter them.[4] They are typically seen deployed with Needlers.[4]

Like the Jackal Major in past games, Jackal Heavies are somewhat tougher and smarter than the Storm Jackals. On higher difficulties, their point defense gauntlets can withstand a single Overcharged plasma pistol shot. They also use the Needler more often than the Storm. In addition, Heavies are harder to stun by shooting them in their exposed gun hand than the Kig-Yar Storms. In general, however, they are still relatively easy to defeat. Despite their protective helmets, a single precision shot to the head will usually bring them down. Although an Overcharged Plasma Pistol shot will not completely disable a Kig-Yar Heavy's shield, it will stagger it, leaving it open to attack.