The M313 Heavy Recovery Vehicle,[2][3][1] commonly known as the Elephant, is a heavy UNSC Marine Corps Mobile Assault, Support, and Recovery Platform.[6] Sometimes referred to as the Behemoth-class Troop Transport,[3] the vehicle is one of the largest ground vehicles employed by the UNSC for ground-based operations, though since the end of the Human-Covenant War in 2552 it has been surpassed in size by the M510 Mammoth.

The size of the Elephant in comparison to other vehicles and a real Elephant.

Designed and manufactured by JOTUN Heavy Industries, the Elephants were initially used in the utility and farming industries during the early colonial expansion periods.[1] After several decades serving in the civilian market, JOTUN was contracted by the UNSC to develop the Elephants and build them as armored repair and recovery vehicles.[1] As time has progressed, the Elephant has been modified into several variants and upgrades, though the Elephant's versatility remains unchanged.

The Elephant is a three-level vehicle--almost a mobile base--with the bottom level acting as a respawn area in multiplayer that opens out into the rear cargo tray. The second level is a walkway/gantry accessed by a ramp that goes around the inside edges of the cargo bay and leads to the driver's cabin. This level is also where one can find the optional AIE-486H Heavy Machine Guns. The third level is small and elevated, situated beside the cockpit. This is where the main armament is found (in the form of an M41 Vulcan). The cargo bay carries several equipment crates built into the external walls, including M52B body armor, CH252 helmets, another AIE-486H chaingun and several crates marked NT/B with a biohazard symbol.

Like the M312 Elephant, the M313 Elephant is designed to safely transport troops, equipment and light vehicles to and from the frontlines. However unlike its previous model, the M313 Elephant features only one M41 Light Anti-Aircraft Gun with 260 degrees roation[4] as its armament, though this can be improved with two additional AIE-486H Heavy Machine Guns. It also features a crane, numerous firing ports and elevated positions for defending it. Its chassis is also as wide as it is high, providing stability. The Elephant houses a Mongoose in its lower bay, and can be made to hold up to an additional of three Mongooses in the front, as well as two in the back with two Warthogs. The vehicle's rear bay lacks the protective armor that is available on the M312 Elephant, thus increasing the vulnerability of its carriage.

The Olifant is a civilian version of the vehicle designed for the purposes of waste management. New Mombasa Waste Management owned and operated these vehicles, using them as garbage trucks.[7][8]

This model of Elephant appears exclusively in Halo 3's multiplayer map Sandtrap, located at each end of the map. It is completely invincible, and open-topped, unlike its counterpart in Halo Wars. The open roof is probably due to the fact that it is a service and repair station, not a troop carrier.

Inside the Elephant is a large screen which contains information on a Mongoose and the Sandtrap's atmosphere, although it is incredibly hard to read. While the vehicle itself cannot be destroyed, its slow speed and lack of armor for gunners render them quite vulnerable. Killing the driver must be attempted from behind, ideally in a vehicle like a Banshee. In objective-based games, the elephant also serves as a mobile bomb plant/spawn site and flag stand.

In Halo: Spartan Strike, the Elephant is armed with twin cannon and twin missile pods. In Mission A-4, a Zealot Elite hijacks an Elephant, destroying the vehicle from inside out to retrieve the Conduit. 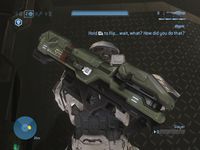 A player flips an Elephant, initiating the Easter Egg.

If by some chance the player does manage to flip over an Elephant, the usual "Hold RB to flip [vehicle name]" script dialog is replaced with "Hold RB to flip...wait, what? How did you do that?", referencing the fact that it is the biggest vehicle in the game and that it is seemingly impossible for it to be flipped. For more information, see Elephant Flipping.