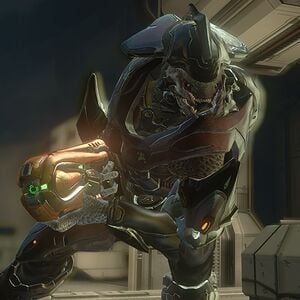 A Sangheili Commander wielding a Zebando'Taa-pattern concussion rifle during the Battle of Requiem. 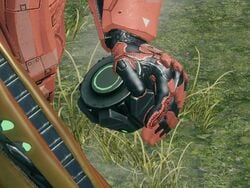 The power cell of a Zebando'Taa-pattern concussion rifle.

Concussion rifles take the form of a compact rifle, similar in form to the Tufasumo-pattern plasma caster, with magazine mounted in front of the foregrip. The magazine is a disposable power cell capable of powering the weapon for six shots before needing to reload. When fired, the weapon fires a Class-4 explosive plasma bolt on a wide ballistic arc, that impact their targets with considerable kinetic force in a manner to the plasma bolts fired by the Type-44 plasma cannon.[1] Despite bearing such a resemblance to Covenant plasma mortars, the Sangheili are hesitant to include them in the same category.[2]

Concussion rifles were developed by the Sangheili in the Former Age prior to the foundation of the Covenant. The earliest designs were created by Qikostian artisan-armorers in this era, with the ultimately-definitive design perfected by warlord Nakada 'Zadum during the Siege of Qikost. The weapons were adopted by the Covenant military following the end of the War of Beginnings, and altered by San'Shyuum administrators to fit the newly-established empire's military standardisation. However, the Merchants of Qikost were able to protect the weapon's design template - retaining exclusive rights to ensure concussion rifles could only by manufactured in Assembly Forges controlled by those of Qikostian descent.[1]

Although the standard principle of the concussion rifle has been in use for millennia, its form has changed in that time.[2] However, the enduring legacy of the Elo'Nakada has proven difficult to shake - making other design variations such as the Zebando'Taa a rare sight only seen with more prominence following the collapse of the Covenant.[1]

Due to their extreme power, concussion rifles of the Covenant were primarily restricted to high-ranking personnel - Generals, Evocati, Special Operations Officers and Jiralhanae shock troopers were generally some of the primary recipients of the weapon.[3]

There are two known design pattern variations of the concussion rifle platform.

The concussion rifles were introduced into the Halo first-person shooter games with 2010's Halo: Reach, and later included again in Halo 4. They are mid-tier power weapons which appear on multiplayer maps in a comparable role to the Grenade Launcher or Sticky Detonator. The concussion rifles exert large amounts of physical force on impact and have a fairly rapid fire rate, making them useful against light vehicles such as Warthogs.

In both Halo: Reach and Halo 4, the concussion rifles were concepted by artist Glenn Israel. Concept sketches produced by Israel also resulted in the design of Halo 5: Guardians' Plasma Caster weapon.