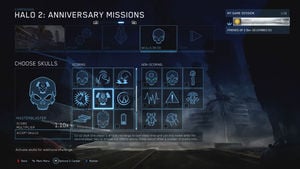 The skull selection menu in The Master Chief Collection

Skulls are gameplay modifiers with the appearance of a human skull featured in Halo: The Master Chief Collection. Like in Halo 3: ODST, Halo: Reach and Halo 4, the skulls are no longer easter eggs in-game, and can also be accessed in the campaign menu without claiming them in campaign levels. A total 38 skulls are included in the collection, including several unique additions to Halo 2: Anniversary.[1]

Skulls in The Master Chief Collection are divided into two categories: Scoring and Non-Scoring. Scoring skulls increase the challenge and reward players with higher score multipliers or bonuses to base enemy values when turned on. Non-Scoring skulls can either be neutral, such as Grunt Birthday Party, or in cases of cheat-like skulls, have a score multiplier of zero. Zero multiplier skulls like Scarab disqualify level times and scores from being recorded on the leaderboard and disable score and time-based achievements.[1]

The games in which the skull is available are listed below each skull. Pre-order skulls are marked with ¹ and were unlocked globally on December 12, 2014. With the exception of these as well as the Swarm skull, all other skulls are unlocked from the start.[1] Skulls marked with ² were not available in the original release of the games, but were implemented via updates in the MCC Insider Program. Skulls marked with ³ are "experimental"; starting a level with one of these skulls activated will result in a pop-up message warning "You have turned on an experimental skull which may produce unexpected scenarios or hinder your ability to complete this mission. Experimental skulls may be disabled to return the game to a normal state." The Acrophobia skull was added into the game for Halo 3 for the release of Halo 3 on PC.[2] The Acrophobia could originally only be unlocked for use by completing a seasonal challenge to kill 343 flying enemies in Halo 3, between July 14 and July 29, 2020.[3] It was unlocked globally after July 29, 2020. New skulls from the collection became available on Halo 3 and Halo 3: ODST with the update on 11 April 2022.[4]