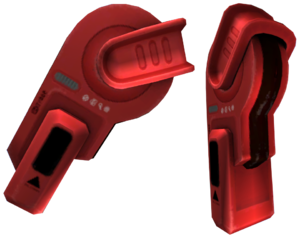 A distress beacon is an automated signal device used in the event of an emergency in space. Various forms of distress beacons exist, including emergency locator beacons,[1] while a particular type of beacon that utilizes slipstream space is colloquially referred to as the slipbeacon.[2] Distress beacons are mounted on most human starships, and are compact enough to fit in a cryo-tube.[1]

In 2526, during the Battle of Circinius IV, Cadet Thomas Lasky used a distress beacon in an attempt to get help for Hastati Squad, but believed that that the beacon was broken when he got no response. After the Master Chief showed up, he explained that he found the cadets due to the distress beacon.[3]

In 2552, a distress beacon was activated by Army fireteams in Visegrád after encountering the Covenant. The beacon was detected by NOBLE Team who landed nearby and investigated. However, they only found the beacon hidden under a broken wooden pallet, a wrecked Warthog, blood smears and some plasma burns, but no sign of whoever had set off the beacon or any bodies. After briefly examining it, Catherine-B320 discarded the distress beacon on the ground.[4]

Later that year, a distress beacon was used by Cortana when the rear half of the UNSC Forward Unto Dawn was left stranded in space after the Battle of Installation 00.[5] In 2557, it was pulled into Requiem along with the remains of the Forward Unto Dawn by Requiem's gravity well and was detected by the UNSC Infinity which attempted to locate the source of the distress beacon.[6] Unable to reach Infinity and warn them of the danger, the Master Chief and Cortana attempted to use the satellite at Requiem's core to reach Infinity, inadvertently releasing the Ur-Didact in the process.[7]

In December 2553, Veta Lopis' Ferret team used a slipbeacon to signal their location to the Sahara-class prowler UNSC Silent Joe during Operation: RETRIBUTION. The slipbeacon was disguised as one of ten HAVOK tactical nuclear weapons that the team claimed to have stolen from the UNSC Taulanti as part of their cover story to gunrunner Ross Nyeto.[8]

The fetcher Oliver Birch used one after he and his dog Mabel became stranded in deep space in a cryo-tube.[1]

After the Attack on Installation 00, the smart-AI Isabel activated the Henry Lamb Research Outpost's distress beacon. Upon the arrival of the UNSC Spirit of Fire in March 2559, the long-lost ship detected the distress signal. However, the UNSC's encryption had changed in the twenty-eight years the ship had been lost and the crew was unable to decipher the signal. Spartan-II Red Team and some of the Spirit of Fire's Marines were deployed to investigate. Upon reaching the outpost, Jerome-092 activated the holotable which brought up Isabel and the message Distress Beacon Activated. Under attack by Banished forces, the UNSC forces rescued Isabel, the only survivor of the attack and retreated to the Spirit of Fire where she explained what happened.[9]

During the Second Ark Conflict in 2559, Captain James Cutter devised a plan to plant a distress beacon on Installation 09 and dispatch it to the Soell system, the former home of Installation 04. There, the beacon would be within range of Reach to contact the UNSC and have them send the UNSC Spirit of Fire help on the Ark.[10] However, while Professor Ellen Anders succeeded in planting the beacon and launching the Halo ring into slipspace, it was intercepted in mid-transit by a Guardian, keeping the message from being received.[11]