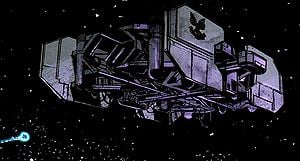 In repeated cycles, scanning stations deploy three probes, referred to as Alpha, Beta and Gamma, respectively. These probes are designed to survive the transition into Slipstream space; as a result they are almost solid Titanium-A.[2] They journey into slipspace for a short period of time where they send out radio pings and analyze the spectrum from radio to X-ray. The probes then re-enter back into normal space and broadcast the data collected back to their stations. Due to the odd nature of interdimensional space, slipspace probes could at times return to normal space exactly where they had originally left, or re-emerge millions of kilometers away. They may also return at different times, due to the nature of slipspace. In some cases, probes never returned back at all. Scanning stations had to dispatch drones to retrieve the probes before the process could be repeated.[3] The probes are not designed to function in the vicinity of gravity wells.[4]

In 2552, the probes of the Archimedes, a remote scanning outpost at the edge of the Sigma Octanus system, detected a Covenant fleet en route to the planet Sigma Octanus IV.[5]

William Lovell, who was stationed aboard the Archimedes at the time, noticed the object's trajectory was parabolic and believed it would pass through Sigma Octanus IV. He collected the relevant data and logged the anomaly. Such an anomaly had been previously described by Fhajad-084 in an astrophysics paper published in 2540. This later allowed Commander Jacob Keyes to properly alert the other ships in the system of an impending attack.

The probes of the RSO Fermion in the Epsilon Eridani system were the first to detect the silhouette of the incoming Fleet of Particular Justice in August 30, 2552.[6]

The Station's Alpha probe detected a large object more than 3,000 kilometers in diameter inbound to the station. CPO McRobb recognized the anomaly and immediately ordered the crew of the Fermion to enact the Cole Protocol. Shortly after, the station's Beta Probe re-appeared into normal space partially damaged. When the station's Gamma Probe did not transmit a signal upon returning to normal space, Lieutenant Brightling suspected that the probe may have translated on a temporal axis. However, Chief McRobb knew the probe had likely been destroyed or jammed by the incoming fleet.[7]

In 2547, Doctor Catherine Halsey used a slipspace probe she had procured from Reach's early warning slipspace observatory (likely Fermion) to launch an AI seed into slipspace as part of an experiment to construct a virtually unlimited AI housing fractal. While the AI became functional Halsey lost contact with the probe soon after, leaving its fate unknown.[4]