Covenant battlecruisers bearing down on a human colony world. 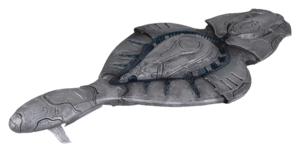 Battlecruisers are a widespread type of advocate ship employed throughout the Covenant and its remnants.[1] When classified by the United Nations Space Command, battlecruisers typically attain the hull code CCS - commonly rendered as CCS-class.[2] Within the Covenant ship classification system, the S in CCS denotes the ship as being a dedicated warship, though the meaning of the double-Cs is currently unknown.[3]

Battlecruisers encompass a number of distinct design pattern variations, with the most common being the Ket-pattern and Elefen-pattern battlecruisers.[4]

Battlecruisers have consistently served in the Covenant's starfleet in some capacity throughout the empire's long existence[1], replacing the older Maugen-pattern armored cruisers between the Fifth and Seventh Age of Reclamation. Since then, battlecruisers have proliferated to be produced in vast quantities - moreso than any other Covenant starship[2] - across dozens of shipyards in a litany of design patterns and other modifications - with the Ket and Elefen dominating the battlecruiser classifications as a whole.[4]

Battlecruisers primarily serve in attack and occupation roles[2], though their workhorse nature sees them frequently serving in a wider variety of functions outside of this.[4] Their offensive and defensive capabilities, combined with a large troop and equipment payload, make them ideal for deployment of ground forces during ground campaigns, or serving as middle-weight combatants (relative to other Covenant ships) in space warfare.[5] This is contrasted with more aggressive executioners such as the Sinaris-pattern heavy destroyer and large carriers such as the Kerel-pattern assault carrier.[1][6]

Battlecruisers are shaped to allow for mobility in atmospheric flight and agility when fighting in space.[5] Their hulls are shaped with sweeping contours and almost-perfect symmetry, visually reminiscent of marine life found on Sangheili colonies.[1][2] Battlecruisers, as with other Covenant cruisers, feature internal modular bays that can be configured as engineering, medical, armory, barracks and religious facilities.[2]

Battlecruisers are best recognised for their distinctive fins, located on the underside of the ship's nose. These fins serve as sensor arrays, the number of which can differ between designs. The battlecruiser's ubiquitous nature has seen them influence many other cruiser designs produced since, with the Zanar-pattern light cruiser produced as a stable mutation of the Ket and Elefen design.[7]

A cross-section of a Ket-pattern battlecruiser.

Buried deep within the vessel's heart is the control center, also known as the bridge and the Combat Information Center (CIC), from where the entire ship's operations are coordinated.[5] Typically occupied by only the highest-ranking officers, the control center is a large room with a centralized bridge platform overlooking the rest of the room. Holographic controls line the outer perimeter of the raised dais. The viewscreens are also holographic projections, visible at the forward end of the room near the ceiling. The viewscreens can either display exterior views of the ship's surroundings or can display tactical data. They can also be synchronized to the onboard security cameras and can display ship schematics.[1]

The CCS-class battlecruiser contains four bisected hangar bays; two to starboard and two to port. They are each three-tiered, with a large amount of space between the floors and ceilings of each level. Each three-tier bay has two retracting metal doors. The bays feature energy barriers over the openings to allow ships to pass through them while retaining atmosphere and pressure inside the ship. These barriers deny the movement of all forms of matter attempting to enter or leave the hangar bays. Each launch area in the bay is capable of housing dropships and Banshee attack craft. Retracting elevators in the decking of each bay are used to ship Covenant ground and air craft into the bays for launching or for gravity connection to a waiting dropship. These elevators lower into holding areas adjacent to cargo bays.[1]

Like most Covenant warships, the CCS-class battlecruiser is equipped with a single ventrally mounted gravity lift, enabling quick and easy transportation of personnel, vehicles, equipment and supplies to a planet's surface. A large, circular platform can be detached and lowered to the ground to provide a stable surface for disembarking and embarking troops, vehicles, and matériel. The platform has six interlocking hinges and is carried with the ship; when the cruiser is in position over a planet's surface, the six interlocks retract and the beam repels the platform at a controlled descent to the surface. Once on the ground the platform acts as an anchor for the ship. The ship can make use of the gravity lift without the platform, but it must remain in position.[1] When attached to the ship, the central gravity platform doubles as the firing port for the energy projector,[6] in a similar fashion to those of the Covenant assault carriers and the Sh'wada-pattern supercarrier.

A battlecruiser firing its pulse lasers and torpedoes.

While specific pattern models and custom variations can vary, battlecruisers typically follow a fairly consistent suite of armaments. Their primary weapon system usually consists of a ventral energy projector, with plasma cannons and pulse laser turrets for secondary and tertiary weapons, respectively.[2][8] They may also be fitted with plasma torpedos.[9]

At least two known design patterns of battlecruiser are known to exist; the Ket and Elefen-patterns.[10] However, these are simply the two most common among many design patterns in use by the Covenant - and many of these designs still see regular modification.[4] As such, it can be difficult to distinguish individual designs from one another.

The only identified Ket-pattern battlecruiser has a relatively unique design, consisting of a nearly-entirely smooth hull and two sensor fins.

The following vessels share a broadly similar design, indicating they may belong to a different design pattern to the Ket-pattern. These include a more segmented hull and variable number (typically 3-4) sensor fins.

It is unknown whether this design represents the Elefen-pattern battlecruiser.

The following battlecruisers cannot be identified to belong to a specific design pattern.