Many Forerunner installations and megastructures boast naturalistic environments, complete with diverse populations of plants and animals. In the case of the Halo Array, this was by design of the Librarian, who allowed the population of ringworlds so as to research on the effects of a Flood outbreak in a controlled environment.[1] 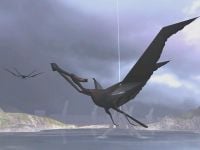 On Installation 05 and Installation 00, Rangmejo can be seen flying in certain locations. They have four wings, long trailing tails, and elongated beaks. Because these features, they have been nicknamed Quadwings.

On Trove in, there were creatures resembling seagulls and eagles.

An unidentified avian species inhabited the gas giant Seclusion, where the Forerunners had a gas mining facility.

Moth-like insects are seen in the dark swamp areas of Alpha Halo.

Sea worms are found in the oceans of Installation 04. They float harmlessly on the surface of the water. When exploring the water, the worms can often be seen in the waters edge, floating.

Various animal calls can be heard in the level 343 Guilty Spark along with the moths. The most common sounds were the sound of an owl hooting and cricket chirping.

On Shield 0459, many of the Flood forms infesting the surface appear to be infected wildlife.

Some Forerunners grew Merse, a species of aquatic carnivore, as pond decorations. One Forerunner planet, home to Bornstellar Makes Eternal Lasting, was briefly host to a species of tri-torsoed aquatic reptiles, which a Lifeworker had imported for his experiments.[2]

Within Shield World 006, there were lizards with narrow, almost birdlike faces and frilled crests. There were also avian creatures resembling birds or bats. Olivia found a beetle-like insect about ten centimeters long with bright orange stripes and a long tapering spike of a tail, crawling on Dr. Halsey.[3]

Stalk plants can be commonly seen in the multiplayer map Backwash, and seen often in the campaign levels 343 Guilty Spark, Gravemind and High Charity. These plants appear as large, thick stalks, as the name suggests and are often bulbous towards the base, tapering upwards into a thinner trunk, in a similar fashion as an onion grown on Earth. The bulb of the plant has been observed to possess some sort of photoluminescence and emits a neon green glow that repeats in a rhythmic pattern. This same property can be observed on the human Combat Form in Halo: Combat Evolved.

Forerunner trees are aesthetically similar to modern trees on Earth. They are found on Forerunner Installations and seem to be quite abundant.[4][5][6] The trees would help keep a balanced ecosystem and make artificial worlds such as the Halo rings seem more natural. Shield worlds also have a variety of trees, such as Ugparassa trees that can be found on Requiem.

Forerunner flora is usually similar to that of Earth, since Forerunners and humans are both species that depend on the same type of ecosystem.

Photos of some Thorn Beasts that didn't make it into the original game.

In original trailers for Halo: Combat Evolved, Installation 04 was inhabited by Thorn Beasts and a species of bipedal animal known as a Blind Wolf.[7] The Blind Wolf was also meant to be rideable by the player as well as have the ability to bite as an attack. They can also be seen in large packs in the E3 2000 Halo trailer.

The main reason these creatures did not make it into the final game was because the developers wanted the surprise introduction of the Flood to be shocking to the player, who had seen no hint of them before encountering them. It was determined that ultimately the presence of other non-Covenant aliens lessened the impact of the Flood's arrival.

Originally, there were unfinished plans for sea creatures to inhabit the water- as seen in The Silent Cartographer, where the water will not kill the player. In early Combat Evolved production there was also a spear gun which could be used on the sea creatures and underwater enemies. A few sea creatures have been seen in early videos like sea monsters and fish. The creatures and spear gun did not appear due to balancing problems. 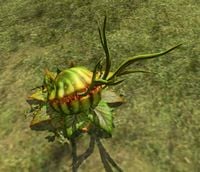 A Venus fly trap-like organism was cut from the development of Halo Wars.[8]