The Halo line of action figures began in 2003, made by Joyride Studios, who produced the Halo: Combat Evolved and most Halo 2 lines. In March 2008, the Todd McFarlane company began producing the Halo 3 action figure sets. They continued producing figures for most of the games that followed, including broader series dedicated to the rest of the Halo universe. In 2010, it was announced that Square Enix's Play Arts Kai brand would also produce Halo action figures, beginning with Halo: Reach. Several other companies have also produced Halo figures.

Joyride Studios produced both the Halo: Combat Evolved and Halo 2 action figures. The Joyride figures were released in more series, but each series had only four-five figures.

Joyride included a serial number on each figure designating when it was created. This date code has four numbers followed by 'SS' stamped or embossed in the cardboard packaging. The first three digits represent the date the product was made, and the fourth digit is the year. For example: 2653SS means the product was manufactured on the 265th day of 2003 (9/23/2003).

Kotobukiya have released several Halo 3-era figures. They announced a new Halo 4 figure set for November 2014.[1] This figure feature the Master Chief standing in a Forerunner ramp, armed with a BR85HB battle rifle and equipped with two sets of interchangeable arms that let it pose him with weapon at the ready or held over his shoulder with an M9 frag grenade in the other hand.[2] 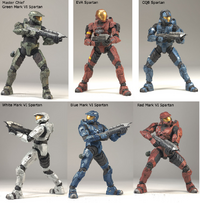 McFarlane Toys produced numerous Halo figures, beginning with Halo 3, and continuing with Halo Wars, Halo 3: ODST, Halo 2 and various other figures from the Halo universe. They also produced figures from Halo: Reach, with the first series released in September 2010, and Halo 4 in 2012.[3] Halo: Reach figures are on a slightly different scale than the previous Halo 3 figures. Spartan figures are slightly taller, even though they are Spartan-IIIs, which are supposed to be smaller than Halo 3's Spartan-IIs. Covenant figures, such as Grunts and Elites, are also larger. Regular human figures, such as the Army troopers, are about the same size as the Spartan figures of Halo 3, larger than the Halo 3 humans. Halo 4 figures are of the same scale as the Reach figures, whereas the Didact figure is twice higher than a Spartan figure.

In October 2014, McFarlane released two Master Chief figures, being these figures based on Master Chief's appearance in Halo 5: Guardians and Halo 2.

On August 2015, the first series of Halo 5: Guardians figures were released. In the same year, McFarlane Toys revealed a new statue for Halo 5: Guardians, featuring Master Chief and Spartan Locke.

On 2016, the second and last series of Halo 5: Guardians figures were released, along with the announcement of the end of the partnership between McFarlane Toys and 343 Industries.

These figures include new features such as Halo Points, which allowed owners to trade the points for other Halo items. However, the program ended on December 1, 2009, and is now unavailable.

They also have considerable differences from the toys produced by Joyride studios; they are considerably smaller, molded in a "6-inch" scale, and have more detailed sculpts, which is McFarlane's hallmark.

Another feature these figures have is that the multiplayer figurines have removable head, shoulder, and chest armor, which allows them to interchange armor and create customizable figures. 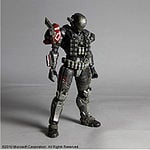 A figure of Emile-A239, made by Square Enix.

Square Enix produced figures of NOBLE Team from Halo: Reach, in much larger scale, than McFarlane's, with the first set in stores in January 2011, and the second set later in April.[4] Their figures are notable for being highly detailed, while still being articulated. Square Enix continued producing figures, for Halo's tenth anniversary, Halo 4, Halo 2: Anniversary,[5] and Halo 5: Guardians.

Jada produces a series of die cast vehicles and figurines for Halo 4.

Sideshow Collectibles' figures are much more expensive than regular figures, but the quality outmatches most of other companies' work. They started by releasing the Master Chief Premium figure from Halo: Combat Evolved Anniversary, and have announced a Halo 4-era Cortana figure.

ThreeA's figures, while similar to Square Enix's ones, are even taller and more detailed. They are also more expensive. Their first release was Carter-A259 in 2013, and many others have since followed.

Bandai America released four Sprukits figures based on three Halo 4 characters with different construction levels. Three figures were Level 2 Sprukits (John-117, Sarah Palmer, and Gabriel Thorne), which were released on August 2014, and the fourth was a Level 3 Master Chief figure, which was released on October 2014.[6][7]

NECA produced a Master Chief action figure based on his Halo 4 appearance. It has two weapons: an M6H Magnum and an MA5D assault rifle.[8] It was released on June 2014.[9]