"With Halo Avatars, we wanted to do something as different as possible from our standard 6-inch figures. Those figures are big, game-accurate, heavily articulated, and serious. Our avatar figures are small, stylized, pre-posed, and playful. With a standard action figure, you know exactly what you're getting. With an avatar figure, each one is a surprise. And collecting a full series of our standard figures can be a significant investment, but an avatar figure is something any fan can afford."
— Todd McFarlane 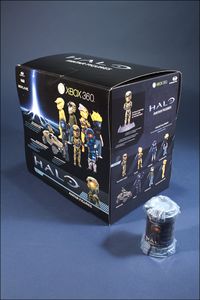 The standard package for all figures.

Halo Avatars Series 1 is the first in McFarlane Toys' line of Halo-themed Xbox Avatar figures[1].[2] In order to represent the customization options avalible for online avatars, the figures feature interchangeable heads, torsos, and legs[1]. The line also includes various "prop" items, such as the Warthog. The figures are 2 1/2 inches tall, and are randomly packaged in small plastic cylinders, the tops and bottoms of which can be removed and used as a display base[1]. The tubes themselves can be connected to form multi-level displays. Series 1 debuted in Fall 2012.

Each tube is packaged with a slip of paper detailing the figurines in that particular wave on the inside and an identical warparound outer cover with the bar code. There are no codes or markings on the outer slip that can enable you to discern the identity of the figure inside. This practice is referred to as "Blind Box" or "Blind Bag" packaging and is a popular practice in many collectible minifigure lines.

This figure is based off of the Master Chief in Mark V avatar armor that as a promotional item for Halo: Combat Evolved Anniversary .

This figure is based off of the Carter avatar armor from Halo: Reach.

This figure is based off of the ODST avatar armor from Halo Waypoint.

This figure is wearing an Elite Costume avatar item.

This figure is a solid gold repaint of the Master Chief avatar figure.

This figure is based off of the Warthog avatar prop.