This article is about the Halo: Reach medal. For the Halo 4 medal, see Rejection (Halo 4 medal). 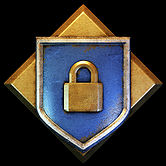 The medal as it appears in Halo: Reach.

Rejection is a Halo: Reach multiplayer medal depicted as a gold diamond superimposed by a blue shield and brass padlock. It's earned by using armor lock and surviving a subsequent assault that would have otherwise been fatal, i.e., a plasma mortar launched from a Zurdo-pattern Wraith. It was revealed alongside two other medals in Bungie's 07/09/10 weekly update.[1] This medal is referred to as Denied in Halo: The Master Chief Collection as the Halo 4 Rejection medal was already in the game by the time Halo: Reach added to the collection.