Vidmaster Challenge: Annual is a Halo 3 XBL-exclusive achievement where the player has to complete the level Halo on four-player Legendary Co-Op with the Iron Skull activated, and everyone in Ghosts[1]. The achievement is named "Annual" because it was only possible to unlock it after September 25, 2008, one year after Halo 3 was released (give or take a day, depending on local time zone).

It is represented by the Iron Skull surrounded by four stars on a green Marathon symbol.

The achievement is also present in Halo: The Master Chief Collection, simply called Annual, and is worth 10 gamerscore. 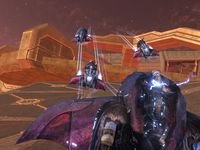 An example of the annual achievement.