From Halopedia, the Halo wiki
(Redirected from Unbending filament)
Jump to: navigation, search 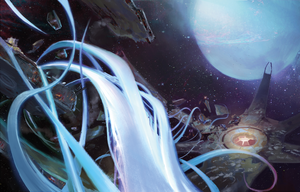 One of the more common types of artifacts left behind by the Precursors, star roads were seemingly inert, several-kilometers-thick,[3] virtually unbreakable cables on an immense scale that lay across the galaxy for millions of years. On some worlds, star roads formed orbital and suborbital structures like orbital arches. On a larger scale, they were used to connect and link planets and even entire star systems to one another.[4] Like other Precursor technology, star roads were not made of ordinary matter. Described as being "anchored in the deepest layers of unreality", the star roads visible in real space were mere shadows of their exotic neural physics construction woven between dimensions.[5] In some star systems, significant portions of locally available mass had been converted into these structures,[6] and when active, they were capable of changing their mass at will.[3]

In their dormant state, star roads and the larger structures some of them comprised automatically adjusted to changes in planetary and stellar orbits, even occasionally removing portions of themselves to avoid collisions with planets. A particularly complex web of star roads in a system in Path Kethona had not survived the eons completely intact, having crumbled in several sections; not even the Precursors could predict the sum of the system's orbital movements for many millions or billions of years in advance. Despite their self-adjusting capabilities, Forerunner Builders insisted that star roads and other Precursor constructs were completely inert and lacking any form of internal process or activity. The Lifeworkers were highly skeptical of these assertions, believing the artifacts were alive in some way.[7]

Charum Hakkor and its system was once home to many star roads, which were used by prehistoric humans to link their orbital defenses surrounding the planet.[8]

During the last decade of the Forerunner-Flood war, it was revealed that the star roads were not completely inert. Having amassed a sufficient level of sheer intellect to elevate itself to a state of transsentience, the Flood's newly-developed Key Mind intelligences began to take control of star roads, along with other once-inactive neural physics constructs, and wield them as weapons as well as a means of transport.[5] The star roads, in their weaponized form, were incredibly powerful, being capable of either physically tearing apart astronomical bodies and Forerunner fleets, interfering with Forerunner slipspace travel, as well as generating suppression fields to disable Forerunner weapons, ancillas and shields. The Flood moved star roads across interstellar distances by using the Precursors' neural physics-based method of superluminal travel, which they also utilized to transport their converted vessels.[9] The Flood-controlled star roads warped reality around them which not only enabled organic beings to feel when they were nearby,[10] but also mutated space-time and converted slipspace to be unsuitable for Forerunner transit.[11]

The Flood configured star roads to various formations when using them as weapons. One common star road configuration was shaped like two parallel double-arcs, over 50,000 kilometers in diameter, and contained thousands of interwoven star roads.[3] In the center of each double-bow was a point of inky darkness surrounded by a glowing ring.[12] These structures had a constantly fluctuating apparent mass, and were seemingly nonsolid.[3] These double-bow configurations were capable of destroying planets by wrapping around them and causing the planet to crack and shrink; Uthera Midgeerrd was destroyed in this manner. It was theorized by Maker-of-Moons that the Precursors moved stars the same way, by forcing changes on their orbits with star road formations.[13]

In many engagements near the end of the Forerunner-Flood war, star roads were used to trap Forerunner forces that were soon overwhelmed by the Flood. One example of this is the Battle of Kan Pakko, in which the Forerunners were defeated by the Flood due to the star roads' influence.[14] The Flood used star roads to destroy entire systems, leaving only dust and rubble in their wake, and cleanse entire star clusters of life.[5] The IsoDidact witnessed nine systems destroyed in this manner.[15] The star roads were also used by Mendicant Bias to trap most of the surviving Forerunners during the Battle of the greater Ark, using the filaments to form a large "wall" around the Ark before slicing the structure apart along with Omega Halo.[16]

Since star roads were based upon the fundamental principle of neural physics, they were vulnerable to the effects of the Halo Array. The first evidence of this was when the Precursor structures on Charum Hakkor were destroyed by Installation 07's test-firing.[1] To all available knowledge, the Forerunners succeeded in destroying all remaining star roads in the Milky Way when the Halo Array was fired. It was theorized that star roads and other Precursor constructs in slipspace transit may have been able to survive the pulse, although this was not known for certain; to inflict as much damage as possible, the Forerunners would time the firing to a point when the maximum number of star roads would occupy normal space.[17]

In 2558, Catalog noted that the Boomerang Nebula was home to numerous star roads and was designated as a Burn as of its most recent knowledge. Given that much of Catalog's information stores are damaged or confused and lacking updates since the loss of the Domain, it is apparent that the information regarding the star roads originates from the time of the Forerunner-Flood war, before the firing of the Halos.[18]