Battle of the Quarantine Zone

"At the center of this zone, is a Sacred Icon critical to the Great Journey. I must find it."
— Thel 'Vadamee to Rtas 'Vadumee

The establishment of the Quarantine Zone is rooted in ancient history - approximately 3,000 years after the activation of the Halo Array, the Flood under containment on Installation 05 were released. Under normal circumstances Sentinel guards would have been able to keep the parasite under control. Unfortunately, the Flood had access to hosts, and were able to hold off the constructs.

At some point, Installation 05's Monitor 2401 Penitent Tangent was warned by a Forerunner ancilla of a pending outbreak in one the installation's Flood containment facilities. The monitor continued to ignore this warning, and those that followed, for millennia. Within 99,779 years, the containment facility had been overrun by the Flood, with lockdown protocols in effect within the Halo's teleportation grid to prevent further infestation.[2] Eventually, the full force of the installation's Sentinels and Enforcers was mobilized, and a Quarantine Zone was established, surrounded by an enormous wall projecting a powerful Containment Shield.[3][4]

The establishment of the Quarantine Zone was too late to prevent the formation of a Gravemind. Over the centuries, the Gravemind's reach spread throughout the installation,[5] eventually capturing the monitor of the installation, 2401 Penitent Tangent, giving him access to the teleportation grid and causing the structures on the Installation to fall into disrepair.[6]

In 2551, a small Covenant team found a Luminary on Meridian after a battle on the moon.This Luminary was delivered to the Prophet of Regret, one of the three ruling Hierarchs of the Covenant. By late 2552, two Stewards assigned to decrypt the Luminary finally revealed its content to the Prophet of Regret: the locations of the Halo rings, including Installation 05. Hastily assembling a fleet of fifteen warships, the Prophet made his way toward the planet that housed the gateway portal to the Ark, unaware that the planet was in fact humanity's heavily defended homeworld.[7] After a failed invasion of Earth, Regret fled to Installation 05 aboard his flagship Solemn Penance, pursued by the UNSC In Amber Clad.[8]

"Proceed to the objective, we'll hold out as long as we can!"
— Gunnery Sergeant Marcus Stacker, as the released flood overwhelm UNSC forces inside the Sentinel Wall. 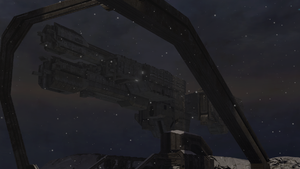 Shortly after arriving in the Coelest system in pursuit of the Solemn Penance, Commander Miranda Keyes of the UNSC In Amber Clad demanded the AI Cortana provide her with all information from the installation her father had discovered a month prior.[9] Keyes was able to locate Installation 05's Library, and set out to reach it and secure it's Activation Index before the Covenant could do so. Marine forces lead by Sergeant Major Avery Johnson were ordered to extract from their positions on the ring's surface and rendezvous with the In Amber Clad at the Library while Spartan John-117 proceeded on his mission to assassinate the Prophet of Regret.[5]

Upon arriving at the Sentinel Wall surrounding the Library and the Containment Shield it projected, the In Amber Clad searched for a way around the obstacle.[10] After failing to gain access to the Library, the frigate deployed a platoon-sized force of Marines to an entrance in the wall, led by Gunnery Sergeant Marcus Stacker and Staff Sergeant Banks. The Marines moved through the outer wall with ease, unmolested by local Sentinel defenses - possibly due to being recognized by the automated guardians as Reclaimers. As the Marines moved through the inner wall, the outer wall became besieged by Jiralhanae-led Covenant forces deployed from the recently arrived High Charity. Eventually, the Arbiter Thel 'Vadamee was able to deactivate the Containment Shield, and the inner wall quickly became overrun with Flood from the nearby quarantine zone. Spread throughout the wall in small fireteams and completely unaware of the nature of enemy they were facing, most of the platoon was quickly assimilated by the parasite, proceeding to take up arms against their former comrades. Additionally, the local Sentinel forces became hostile to the surviving Marines, likely due to the immediate presence of the Flood. With his forces decimated, but the Containment Shield now disabled, Stacker radioed In Amber Clad suggesting Keyes proceed straight to the Library while his troops attempted to hold their position. A short time later, Stacker made contact with Keyes once again, confirming their engagement with non-Covenant hostile lifeforms, while Banks could be heard organizing other Marine survivors as they staged a desperate defense.[3]

The In Amber Clad swiftly took advantage of the lowered Containment Shield, entering the Quarantine Zone as battle raged between hostile Sentinel forces and the Flood. The Frigate took position above the east-most of three large structures in the center of the zone, each containing a gondola leading to the Library. Multiple M808 Scorpions and M12 Warthogs were deployed via dropship, and the UNSC forces secured the east and central gondolas, and established several defensive positions throughout the central Quarantine Zone. UNSC superiority would be short-lived, as the Flood's acquisition of vehicles brought by the In Amber Clad and arriving Covenant forces swung the battle in their favor. With the subsequent destruction of a Sentinel manufacturing facility reinforcing the Quarantine Zone, the Flood presence quickly became overwhelming. A sizable UNSC force made a final stand outside the western gondola structure, utilizing multiple stationary M247 machine gun turrets. Despite receiving reinforcements during the battle from a stray UNSC Pelican carrying a Scorpion, the position was overrun, the Pelican shot down and the Scorpion left abandoned. Meanwhile at the eastern structure, Commander Keyes lead Sergeant Johnson and a squad of Marines aboard the eastern Gondola. Moments later, Covenant Special Operations forces launched the western gondola, in close pursuit.[4]

As Johnson and Keyes arrived at the Library, four Marines were killed by a horde of Flood combat forms. After securing the facility, Johnson left Corporal Perez and McKenzie to guard the exit while he escorted Keyes to retrieve the Index, however the Marines would be killed by a swarm of Pod infectors. Johnson and Keyes thus had no warning as a cloaked Thel 'Vadamee ambushed them, and arriving Jiralhanae forces led by the Chieftain Tartarus subsequently captured the index, taking the unconscious Johnson and Keyes as prisoners.[4]

With the majority of the ship's Marine complement killed in action, the In Amber Clad was eventually overrun by the surging Flood presence, and it's entire crew presumably killed. A number of Marine survivors from the battle were captured by Covenant forces,[6] including Sergeants Banks and Stacker.[11]

"We shall cut into the heart of this infestation, retrieve the Icon, and burn any Flood that stand in our way!"
— Special Operations Commander Rtas 'Vadumee after learning of the Arbiter's mission

After numerous waves of Jiralhanae-led forces failed to breach the outer wall, Thel 'Vadamee, the Arbiter of the Covenant, was personally ordered by the Prophets to journey to the surface of the ring to retrieve the Sacred Icon. Dropped directly to the wall by a Phantom transport, the Arbiter encountered a small number of surviving Unggoy and Kig-Yar from the earlier assault. After battling through numerous Forerunner constructs to reach the control center for the Containment Shield, the Arbiter deactivated the shield, proceeding to the inner wall. After his evac Phantom was driven off by a Sentinel Enforcer, 'Vadamee was forced to travel through the now-Flood infested inner-wall. He picked up multiple transmissions from the dwindling human forces that had made it through the wall first, observing two small fireteams of Marines being overwhelmed by Flood forms.[3]

As the Arbiter moved through the Sentinel Wall, Covenant Special Operations forces were deployed to the Quarantine Zone, along with vehicular support, unfortunately exacerbating the Flood outbreak. The Flood's numbers swelled as they assimilated both humans from the UNSC In Amber Clad and Covenant warriors. With these new hosts, the Flood gained access to more sophisticated equipment, weapons and combat vehicles, magnifying the danger the outbreak presented immeasurably. The Flood used numerous Wraith tanks to destroy one of the Forerunner Sentinel manufacturing plants, bringing it crashing down on the surface and slowing the production of Sentinels and Enforcers, swinging the tide further in their favor.[3]

The Arbiter exited the Sentinel Wall as drop pods containing Special Operations Sangheili arrived in the quarantine zone. 'Vadamee moved to assist his brothers in repelling the local Flood forces in the valley. One of the Sangheili told 'Vadamee that they needed to rendezvous with their commander, Rtas 'Vadumee who had landed deeper into the zone. The group made their way through the valley, fighting off numerous Flood forms before locating 'Vadumee who, along with other Elites, was defending a small Covenant camp, repelling the Flood until more vehicles could be delivered. With the assistance of Thel 'Vadamee, the group was able to secure the camp and use it as a staging area for their push towards the installation's Library. The group traversed the war-torn wastes of the quarantine zone, facing massive numbers of Flood forms controlling both UNSC and Covenant vehicles as well as surviving Forerunner constructs before reaching the gondola entrance points to the Library of Delta Halo. After noticing human forces had already departed, 'Vadumee boarded a gondola alongside a squad of Special Operations troops while Rtas 'Vadumee stayed behind to defend the Gondola station.[4]

Human forces had gained access to the Library first, but only by a matter of minutes. The Arbiter exited the Gondala while his fellow Sangheili warriors stayed aboard to guard it, as it was the only entrance/exit. Upon exploring the interior of the Library, it was clear that the humans had faced stiff opposition, all but two of their forces had died combating the Flood and Sentinels already within its walls. Thel 'Vadamee found Commander Miranda Keyes and Sergeant Johnson within the Index Chamber, having retrieved the Index seconds before his arrival. Sergeant Johnson was ready, armed with a Battle Rifle, along with Miranda Keyes who was reaching for the Index holding on to a large wire from a downed enforcer. Miranda secured the Index and drew two SMGs. Johnson called for his Marines, but received no answer and armed his weapon. An active-camouflaged Arbiter ambushed the pair, incapacitating both in a matter of moments. The arrival of Tartarus and his hostile Jiralhanae forces within the Chamber, after making their way through the Sangheili forces guarding the Gondala, signified the beginning of the Great Schism. Tartarus briefly told the Arbiter how the Sangheili had been expelled from the Covenant under the orders of the High Prophet of Truth, and proceeded to attack the Arbiter, sending him plummeting to his doom deep within the Library, towards the Gravemind.[4]

The battle itself was a decisive Covenant victory. They succeeded in obtaining the Index, captured the UNSC leadership as well as all surviving Marines, providing them with the Reclaimers required to activate the Installation. The Flood also won a tactical victory, securing an immense number of hosts, weapons and vehicles, escaping the Quarantine Zone, and capturing a slipspace-capable starship in the UNSC In Amber Clad, which they would later use to begin their infestation of High Charity.[12] UNSC forces failed to recover the Index, lost the In Amber Clad and it's crew to Flood, and suffered total casualties, aside from the small number of survivors captured by the Covenant from the Library and Sentinel Wall.