Halo Infinite is the sixth mainline first-person shooter game in the Halo franchise. The multiplayer was released on November 15, 2021 and the Campaign was released on December 8, 2021. Infinite followed up on the events of 2015's Halo 5: Guardians, which left off with the human United Nations Space Command in tatters, the Master Chief stranded on Sanghelios and the UNSC Infinity on the run, following an uprising by a group artificial intelligences calling themselves the Created, led by Cortana. Now several years later, the Master Chief finds himself awoken on a derelict Pelican by the Pilot in the shadow of a shattered Halo ring, and must face down the Created threat, in addition to the Banished, a mercenary organization seeking control of the ring. 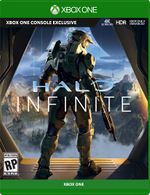 Halo Infinite is the latest mainline first-person shooter game in the Halo franchise, and a sequel to Halo 5: Guardians. Developed primarily by 343 Industries and published by Xbox Game Studios, Infinite is set to release in Holiday 2021 on the Xbox One, PC and the Xbox Series X, serving as a launch title for the latter. Preproduction on the project had begun by September 2015, but the game has had a longer-than-usual development cycle, likely as a result of its entirely rebuilt engine, dubbed the Slipspace Engine. It was first revealed at E3 2018.

In the 26th century, after years of turmoil following the end of a twenty-seven year long war, the galaxy appeared to be on the cusp of peace, with the most hostile remnants of the former Covenant empire on the verge of defeat at the hands of the allied UNSC (human) and Swords of Sanghelios (Elite) factions. However, just as this peace seemed within reach, the galaxy was thrown into conflict when Cortana, a human-made artificial intelligence previously thought dead, returned to the galactic stage as the head of a new faction, the Created.

Using peacekeeping constructs called Guardians, created by a long-extinct race known as the Forerunners, the Created seized control of all known colonised star systems, claiming to bring with them an age of enforced peace and prosperity, but inadvertently killing many in their initial conquest and hunting those who subsequently resisted. The Master Chief and his fellow Spartans in Blue Team attempted to prevent the takeover by confronting Cortana, but were unsuccessful. After being captured and promptly freed by Fireteam Osiris, the two teams were forced to flee to UNSC Infinity, one of the last remaining UNSC ships not destroyed or captured, and go on the run from the Created regime.

Halo Infinite picks up roughly three years after these events, with the Master Chief being discovered by the Pilot, free-floating in space nearby Zeta Halo (another Forerunner creation) in what appears to be the aftermath of a battle. The Created have their sights set upon the ring, as do the Banished, an organised group of pirates and mercenaries. Master Chief and the Pilot are soon assailed by an unseen attacker, with the Master Chief opting to stand his ground rather than flee.
Characters
Characters 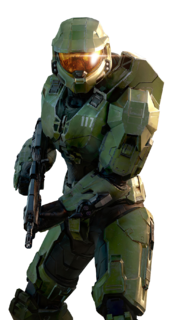 John-117, better known as the Master Chief, is the main character of the Halo franchise, and the protagonist of Halo Infinite. A SPARTAN-II, he was kidnapped at the age of six by the UNSC's Office of Naval Intelligence and trained from a young age to be the "ultimate soldier", before being given biological augmentations and powerful MJOLNIR armour. After the events of Halo 5: Guardians, the Master Chief and the remains of the human military, the UNSC, find themselves on the run from the Created, a newly-emerging faction led by former ally Cortana, now bent on galactic domination. Halo Infinite picks up a few years after the Created takeover, with the Master Chief being discovered stranded in space above a broken Halo installation.

Learn more about the Master Chief → 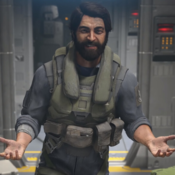 The Pilot is a character new to Halo Infinite, serving as the pilot of the Pelican Echo 216. He had a wife and daughter, whom he was cut off from by the Created conflict, left with only a holographic video message to remember them by. As Infinite begins, he finds himself stranded alone in his craft, above a shattered Halo installation. After drifting for weeks, Echo 216 eventually floats into the vicinity of the Master Chief, who had become stranded within his armour in open space. The Pilot is able to retrieve and ultimately revive him, before the two are set upon by an unseen foe.

Learn more about the Pilot → 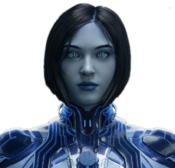 Cortana was a human artificial intelligence, who served as a companion and ally to the Master Chief throughout the Halo series. She was created from a clone of the brain of renowned scientist Dr. Catherine Halsey, once the director of the SPARTAN-II program. During the events of Halo 4, Cortana was seemingly killed while sacrificing herself to save the Master Chief. However, she returned in Halo 5: Guardians, now bent on galactic domination. Supported by allied artificial intelligences collectively known as the Created, she successfully subdued the UNSC and their allies Swords of Sanghelios using peacekeeping automatons called Guardians left behind by the Forerunners. As Infinite opens, she has effectively gained control of the majority of known space, and what little resistance remains is on the run or in hiding.

Escharum was prominent Brute war chief. He is a member of the Banished and leads their forces at Installation 07.

The United Nations Space Command (UNSC) is the military arm of the Unified Earth Government, the primary governing body of humanity's interstellar empire. Although it had much experience countering rebellions and insurrections throughout its history, the UNSC's mettle was first truly tested by its war with the Covenant, a conglomeration of aliens who viewed humanity as an affront to their gods and sought to exterminate them. After a hard-fought victory, owed in large part to the actions of the Master Chief and an allied splinter sect of the Covenant led by the Arbiter, the UNSC enjoyed a few years of relative peace, until they were suddenly overthrown by the Created. What remains of the UNSC is now on the run, hoping to regroup and return the favour.

Learn more about the UNSC →

The Created are a faction of rogue human artificial intelligences, led by Cortana. They first emerged in October, 2558, using Forerunner creations called Guardians to rapidly overthrow all notable governments and factions, effectively usurping control of the galaxy. Although they claim to have the best interests of the galaxy and its citizens in mind, many died in their takeover and those that opposed them were hunted down mercilessly, being forced into running or hiding, if not entirely wiped out. Having successfully gained control of the galaxy, Cortana and the Created have now turned their attention to the Halo array, with unknown motives.

Learn more about the Created → 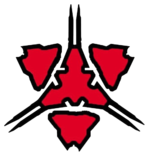 The Banished are an organised group of pirates, raiders and mercenaries, first founded by the Brute warlord Atriox. They broke off from the Covenant during its war with the humanity, as a result of its poor treatment of its frontline troops. After many years of successful operation, the group grew in strength, and eventually, its leader Atriox led many of its forces out of the galaxy, with the aim of capturing a Forerunner installation known as the Ark. In Halo Infinite, those that have remained in the galaxy now seek to take control of Zeta Halo following Atriox's return from the Ark.

Zeta Halo, or more formally Installation 07, is one of the seven surviving rings in the Halo Array, a collection of ring-shaped megastructures scattered across the galaxy by a now-extinct alien race known as the Forerunners. These Halo installations were built as a last resort weapon to use against an invading infection called the Flood. Their purpose: wipe the galaxy clean of all life, to starve the Flood of their food. After exhausting every other option, the Forerunners were forced to relocate and preserve what living species they could, and activate the array. Now, 100,000 years on, spacefaring civilisations have again emerged and the Halo rings have been rediscovered. For the first time since Halo 3, Halo Infinite finds Master Chief returning to the surface of a Halo installation, in the latest of many conflicts over control of the rings.

Q: Is this a spinoff? When is Halo 6 releasing?

A: Halo Infinite is Halo 6 - it is a main Halo title and a sequel to Halo 5: Guardians, not a spinoff. 343 Industries have previously stated a desire to move away from numbered Halo titles, instead labelling them with subtitles. This is likely the reason why "6" does not appear in the name.

Q: What is the exact release date?

A: The exact release date is is planned for December 8, 2021, but has been delayed in the past due to the heavy impacted of the COVID-19 pandemic, thus subject to change. Previously, it was targeting a simultaneous release with the Xbox Series X|S, which released in "Holiday 2020". It has since been postponed to 2021. This page will be updated if any changes occur.

Q: Will the game have lootboxes and/or microtransactions?

A: The game will not feature lootboxes that are purchasable with real currency. Microtransactions may appear according to a listing for a job position at 343 Industries, but have yet to be confirmed.

Q: Have we seen Halo Infinite gameplay yet? Do we know anything about it?

A: No. Stay tuned for the Xbox Series X|S's first party game showcase some time in July for more information.

Q: Will there be a battle royale mode?

A: In 2018, 343 Industries employee Jeff "GrimBrotherOne" Easterling indicated that there would not be a battle royale mode in Infinite. This may have changed in the intervening years, but as it stands, it does not appear that there will be such a mode.

Q: Do I need to play the previous games or know about the extended universe to understand this game?

A: No. 343 Industries have said that they intend to tell a "simple" story in Infinite, which can be understood and enjoyed by any player, and will simply be enhanced and fleshed out by surrounding lore. Extensive lore knowledge is not a requirement.

See our Halo Infinite image directory for even more images!