From Halopedia, the Halo wiki
(Redirected from Boarding (attack))
Jump to: navigation, search

A Covenant boarding party preparing to disembark on the UNSC Pillar of Autumn.

Boarding generally refers to the insertion of people onto an enemy or ambiguously affiliated ship. Boarding may be carried out during wartime in an attempt to seize and possibly destroy the vessel, or it may occur in peacetime by pirates and other criminals, or as a means of inspection to prevent piracy and smuggling. A "boarding party" is a group of naval infantry, typically known as "marines", assigned to capture an enemy ship or station by killing or capturing its crew.

Boarding is used in wartime as a way to seize a vessel without destroying it, or to remove its cargo before it is destroyed. It can also be used to aid in the collection of naval intelligence, as soldiers boarding a sinking, crippled, or surrendered vessel could possibly recover enemy plans or technology. For a boarding to be successful, it must occur without the knowledge of the crew of the defending ship, or the ship's defenses must be suppressed.

In peacetime, boarding actions are often carried out to police vessels in order to suppress piracy, smuggling, and insurrection. 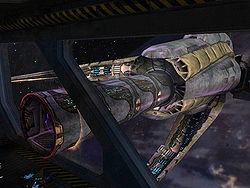 Covenant naval commanders utilize boarding to attempt to capture enemy vessels and their technology whole, or to avoid a space battle that could damage both their ships and their enemy's vessel, the destruction of which would deprive the Covenant of valuable intelligence on the United Nations Space Command.

Until the Great Schism in November 2552, Covenant boarding parties were generally composed of Sangheili, Unggoy, and sometimes Yanme'e. The Covenant typically employ designated boarding craft launched from larger vessels to cut through the hull of the enemy ship or station and rapidly insert infantry to the interior.[1] Vacant airlocks may also be used by boarding craft to latch on and gain entry into an enemy ship.[2] Some starships, such as Kig-yar privateer ships, are equipped with docking umbilicals with penetrator tips specifically designed to cut into an enemy ship.[3]

In most cases, UNSC forces use D77-TC Pelican dropships to ferry Marine forces from ship-to-ship. This insertion method was used when UNSC Marines boarded the UNSC Prophecy during the Harvest campaign in 2531.[4] Spartans in MJOLNIR Powered Assault Armor are capable of boarding ships through the use of EVA equipment, as the MJOLNIR system is vacuum sealed; this occurred during the boarding of the Covenant vessel Unrelenting at the Battle of Chi Ceti. During the Fall of Reach in August 2552, the UNSC used YSS-1000 Sabres and a D77-TC Pelican to successfully board the Covenant corvette Ardent Prayer to deliver a makeshift bomb to the Covenant supercarrier Long Night of Solace.[5]

A tactic sometimes used by the UNSC against Covenant boarders is the depressurization of hull compartments which have been compromised by boarders, suffocating any hostiles not wearing vacuum suits. This measure was utilized aboard the UNSC Pillar of Autumn during the Battle of Installation 04.[6]

On September 19, UNSC forces, in an attempt to rescue Captain Jacob Keyes, boarded the damaged CCS-class battlecruiser Truth and Reconciliation as it held position over Halo Installation 04.[7] Two days later, Spartan John-117 again boarded the vessel, which was now controlled by the Flood, to retrieve the captain's command neural interface.[8] On September 22, the remaining Marines, ODSTs, and naval personnel boarded the ship in an attempt to use it to travel to Earth; however, First Lieutenant Melissa McKay crashed the ship into the Halo to prevent the Flood from spreading to Earth and across UNSC space.[9]

During the Battle of Earth, a large Orbital Drop Shock Trooper unit was to board the Solemn Penance using SOEIVs, but failed when the carrier jumped into slipspace.[10] Two weeks later, Spartan Blue Team boarded the Covenant destroyer Bloodied Spirit by stowing away from the Centennial Orbital Elevator.[11]

The OF92/EVA "Booster Frame" is a UNSC vehicle designed for boarding Covenant vessels. With specialized weapon systems, it is able to rip small holes in a ship's energy shields and then pierce then hull with a Gauss cannon. These vehicles have no sealed cockpit; thus a pressurized suit must be worn.

In 2535, ODSTs from the light frigate Midsummer Night boarded the civilian freighter Finnegan's Wake.[12] This demonstrates the UNSC's commonly enacted efforts to combat insurrectionist smugglers during the early years of the Human-Covenant War.

In 2557 during the Didact's attack on Earth Master Chief Petty Officer John-117 boarded the Didact's ship Mantle's Approach using an F-41 Broadsword fighter to destroy it and the Composer with a HAVOK tactical nuclear weapon, a mission that succeeded, saving the population of Earth from being digitized by the Composer.

During the Battle of Installation 05, Flood carrier forms were ejected from an airlock of an infected starship towards an uninfected starship.[13] Also, the Flood used the UNSC In Amber Clad to board and capture High Charity. In the later years of the Forerunner-Flood war, it was standard practice for Flood forces to board and infest Forerunner vessels after the latter had been disabled by suppression fields emitted by star roads or other Precursor constructs at the Flood's disposal. Due to the suppression fields disabling their systems, very few Forerunner ships were capable of self-destructing before they were overwhelmed.[14]

In their first battle against the Flood, the Promethean Knights were deployed from the Mantle's Approach to board the enemy ships and destroy them from within. The Knights would use thruster packs to control their flight pattern.[15]