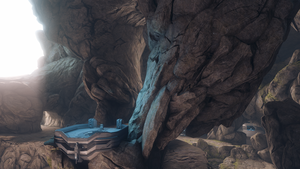 The cavern area in "Warrens".

Warrens, designated Site Req//3490-1189,[1] is the UNSC codename for a location on the Forerunner shield world of Requiem. It is a Forerunner structure built into a large cavern close to Apex.

During the Requiem Campaign in February 2558, Jul 'Mdama's reformed Covenant had created a small outpost in the "Warrens" with at least three Zanar-pattern light cruisers overhead guarding it. This facility acted as a central intel center for the Covenant. After recovering data from another Covenant outpost, the UNSC Infinity sent Fireteam Crimson to infiltrate the facility. Crimson managed to force their way into the facility, but were ambushed by a group of Promethean Knights. The Spartans eliminated all hostiles in the area and hacked the intel center's computer. Crimson learned about a Covenant archaeological dig in progress and a Covenant supply depot very near Crimson's position. With this information, Fireteam Crimson were evacuated from the Warrens by Lieutenant TJ Murphy's hijacked Phantom.[2]

Later in the campaign, Fireteam Lancer discovered that the Covenant had resettled the "Warrens" and a new Covenant base had been created. Lancer and Crimson regrouped and attacked the base together. However, a shield wall blocked the Spartan's access to the "Warrens" and the generators powering the walls were camouflaged. After eliminating the Sangheili that was controlling the cloaked generators, they destroyed the now exposed shield generators, bringing the shield wall down. Crimson and Lancer made their way into the base and cleared out all of the Covenant forces around the base. The Spartans ventured into the caves of the "Warrens" where they detected an SOS signal that was being broadcasted from inside the cave system. While searching the caves, the Spartans came across a Forerunner structure and they eliminated the Covenant and Promethean forces protecting it. Inside the structure, Crimson found Fireteam Switchback - who had gone missing while trying to disrupt a Covenant excavation - trapped behind a shield wall. Crimson rescued Switchback and, after eliminating remaining hostiles, the three fireteams were picked up by a Pelican.[3]

Unable to drop Crimson off at "Apex" due to heavy Covenant resistance, the fireteam was deployed at the "Warrens" where Spartan Jared Miller believed there was a path to Apex through the caves. As Crimson eliminated Covenant and Promethean forces throughout the "Warrens," they began to experience tremors from Requiem breaking apart. Eventually, the Spartans made it to "Apex."[4] Later, Fireteam Crimson passed through the "Warrens" with a Lich's engine core. The Spartans salvaged several vehicles along the way and eventually a Pelican picked them up.[5]

The "Warrens" were eventually destroyed when Requiem was sent on a collision course with its star.[6]