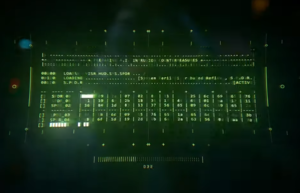 SPDR as part of the MJOLNIR GEN3 BIOS.

The System Peril Distributed Reflex (or SPDR, pronounced "spider") is an automated program placed in UNSC AIs to assist the AI in repair when it becomes too damaged to function properly on its own.

When a temporal rip caused Melissa to crash into the ilovebees server in 2004, her SPDR repaired her greatly and fought to remove the threat of the Seeker, a malicious Covenant AI, eventually succeeding. Before it did, however, the Seeker absorbed the SPDR's language and impersonated it.

Melissa was too damaged to tell the difference and temporarily disabled the real SPDR, allowing the Seeker to corrupt her. When the rip closed and sent her back home, the Seeker and the SPDR were left alone in the ilovebees server. The SPDR killed the Seeker and prepared the server to keep it functional for 500 years until October 9, 2552, at 06:07:00, until it could send itself and the information it had gathered to UNSC forces.

Around January 6, 2554, half a dozen of SPDR and MOIRAI threads were set up by interested parties of a lot of files.[1]

By September 2559, SPDR was implemented as part of the MJOLNIR Powered Assault Armor (GEN3) internal software package used by John-117, and was seemingly utilised as part of counterintrusion measures by hostile AIs such as those of the Created.[2][3]

A fragment of Melissa called The Sleeping Princess communicated the SPDR's (whom she called the Widow) story through corrupted image files that were taken and pieced together to create the narrative of The Widow's Journey.