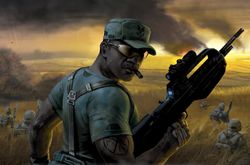 Shooting glasses are a piece of military equipment developed by the Office of Naval Intelligence, designed to be worn by Marines on the battlefield. The glasses provide ground troops protection from foreign objects that could cause damage to the eye. The orange tint of the glasses also protects from being outside in the sunlight for long periods of time. As of 2525 the glasses offered no optical magnification, but in the upper corner of the left lens was a small heads-up display.[1]

Shooting glasses were included in Lieutenant Commander Jilan al-Cygni's ONI weapons cache. These glasses were used in 2525 by Avery Johnson and Nolan Byrne during the First Battle of Harvest.

Cadets at the prestigious Corbulo Academy of Military Science donned such glasses during combat exercises on the school's training grounds. The glasses also notified cadets when their comrades were neutralized in battle.[2]

The glasses worn by Dr. Catherine Halsey possessed technology similar to that used in the UNSC shooting glasses, including a HUD.[3]