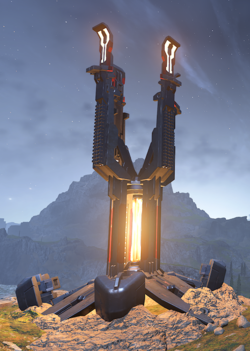 A propaganda tower on Installation 07.

During the Battle for Zeta Halo, the Banished set up at least forty propaganda towers on the fragmented section of the Ring, which were operated by Glibnub, an Unggoy communications officer. Glibnub constantly broadcasted taunting and demoralizing messages to the surviving UNSC personnel. These messages typically contained unverifiable statements, half-truths, or outright lies (such as the Master Chief merely killed "four Grunts in an Escharum suit"), and occasionally the Unggoy officer would simply air some personal grievance instead, such as him being upset over the towers being destroyed.[1]