This article is about the video game engineer. For the artist, see Luke Smith. 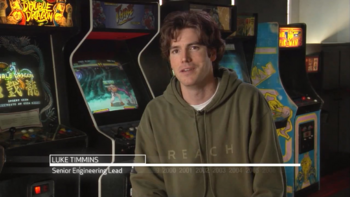 Luke Timmins (also known as Abe Fromen SK) is an American video game engineer. Born in Ellicott City, Maryland, USA in 1981, Timmins was hired by Bungie Studios in 2001 and served as SDET and was credited as a video game tester for Halo: Combat Evolved.[1] Later, he was credited as an engineer for both Halo 2 and Halo 3.[2][3] During Halo 3: ODST's development, he contributed as an engineer.[4] He is credited as the Multiplayer/UI Engineering Lead in Halo: Reach.[5]

According to the sixteenth episode of the Bungie Podcast, Luke had a run in with the law that resulted in a Class A misdemeanor. More details can be heard on the podcast.[6]

Timmins' gamertag is referenced in the "Camp Froman" area of the multiplayer map Zanzibar and its remake Last Resort.