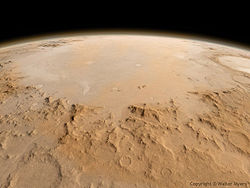 Argyre Planitia is a plain and city located in the Argyre Impact Basin in the southern highlands of the human colony of Mars.[1][2] Its name comes from a map produced by Giovanni Schiaparelli in 1877; it refers to Argyre, a mythical island of silver in Greek mythology.

Following the colonization of Mars, Argyre Planitia was settled as a city home to shipbuilding plants.[1][2] As conflict in the Sol system intensified in the 2160s, the shipbuilding plants fell under control of the Koslovics, becoming the hub of Koslovic activity on Mars. In December 2163, the United Nations organized a successful major offensive against the Koslovics in the Argyre Planitia. This marked the historical first deployment of Marines outside of Earth, and thus, the first official conflict of the United Nations Space Command.[1] Frieden forces also attacked the city at the same time; within hours of the initial battle, Argyre Planitia's infrastructure was almost entirely destroyed. Within the following weeks, battles continued to occur throughout Argyre Planitia as Koslovic forces were pushed to the city's outskirts.[2]

On October 13, 2552, gravitic and radiation anomalies were detected near Argyre Planitia. In response, the UNSC's Naval Special Warfare Command deployed a scouting team led by Staff Sergeant Malcolm Geffen to investigate and conduct an on-site search and assessment. The scouting team discovered cloaked remote sensor platforms of unknown origin, triggering cryptonym WIDEAWAKE. After consultation with Admiral Margaret Parangosky, Commander-in-Chief of the Office of Naval Intelligence, Fleet Admiral Joseph Harper issued a priority-1 stand-down. Remaining records were redacted,[3] though the sensor platforms were likely deployed by the Covenant in preparation for the Battle of Earth.