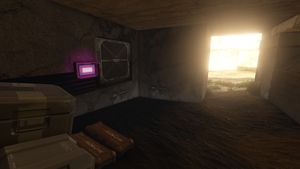 The terminal is a computer screen in the darkened ground floor of the small building.

Campaign level: Outskirts
The terminal is a computer screen located on ground floor of the small building in the beach area before entering the highway tunnels. The console's screen flashes "INCOMING MESSAGE" in red.

Cut to a hologram of Camber with UNSC cruisers and frigates in orbit as Locke narrates.

The camera quickly pans to several orbital defense platforms defending the colony. The Fleet of Particular Justice enters the system from slipspace. The Covenant fleet begins to attack the ODPs and UNSC ships.

Cut to the UNSC HQ on Camber in the rain. The nearby streets are bombed by plasma.

Cut to the view of a helmet recorder sitting on a bench that observes numerous UNSC Marines preparing for combat in a locker room while alarms are sounding. One Marine picks up the helmet with the recorder and dons it. The Marines begin to run towards the exit of the room, unarmed. Suddenly, a door explodes and the Marine with the helmet recorder is knocked to the ground. The view fades to black.

Cut to a view of the glassed Camber with numerous destroyed ships over the colony. A counter showing the colony's human population appears and begins sharply decreasing. Fade to black.