UNSC Forward Unto Dawn is a Charon-class light frigate in service with the UNSC Navy and captained by Commander Miranda Keyes. The frigate is one of the few surviving vessels of the UNSC Home Fleet left to defend Earth after weeks of battling the Covenant in space.

Learn more about Forward Unto Dawn → 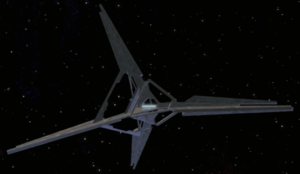 Anodyne Spirit, more commonly known as the Forerunner Dreadnought, is a titanic Forerunner spacecraft now commanded by the Prophet of Truth. For millennia, the ship sat at the heart of High Charity as a symbol of the Covenant's unification and a limitless power supply for the city, but was used to escape the outbreak of the Flood parasite during the onset of the Covenant civil war. John-117 was last seen aboard the Dreadnought, as it made its way toward Earth.

Learn more about the Forerunner Dreadnought → 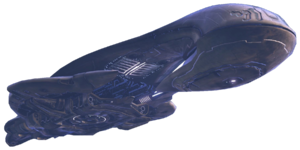 Shadow of Intent is a CAS-class assault carrier formerly under Brute control and now commandeered by Elite commander Rtas 'Vadum. The carrier now serves as the flagship of the Arbiter's Fleet of Retribution, and a vital prize for either side of the war.

Learn more about Shadow of Intent →

UNSC Aegis Fate is another Charon-class light frigate in service of the UNSC Navy. It serves alongside Forward Unto Dawn in Battle Group Victory to defend the Earth, and can be seen in the skybox of the multiplayer level Sandtrap. 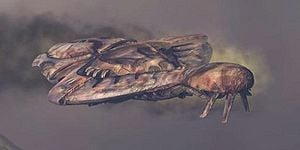 Indulgence of Conviction is a Ket-pattern battlecruiser formerly of Covenant service. During the Battle of Installation 05, the vessel fought in orbit above the installation, and was part of the effort to quarantine the Flood outbreak on High Charity and in the Covenant fleet. Ultimately, the ship succumbed to the infection and, having broken the quarantine of the Coelest system, is now on a path to transport armies of the Flood to Earth.

Learn more about Indulgence of Conviction → 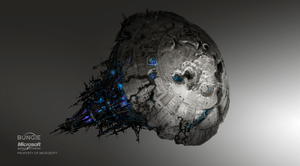 High Charity was the holy city and crown jewel at the heart of the Covenant empire. For millennia, High Charity boasted the seat of the Hierarchy and the High Council alongside numerous ministries and billions of Covenant citizens. The city fell to the Flood in the battle at Delta Halo, and is now occupied by the gargantuan Gravemind and untold hordes of the Flood.