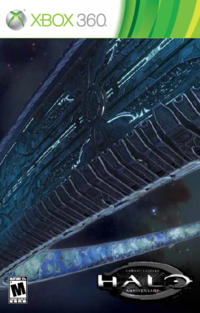 The cover of the manual.

The manual has seven numbered pages, excluding the back cover. It is divided into a number of sections and subsections:

This section includes a web address to help players learn more about the game's features: www.halowaypoint.com/remastered. It also includes health and safety warnings. The last part includes legal information and the copyrights and trademarks of the companies involved in the game's creation.

"It’s hard to imagine now, but in 2001, when Halo: Combat Evolved was released, the landscape of console games looked very different. There were first-person shooters, even sci-fi soldiers, but there was nothing like the iconic experience that Halo offered: pulse-pounding combat against convincing AI enemies, set in a fully realized universe with a rich, epic history and a cast of memorable characters. Now, in 2011, it’s impossible to imagine the gaming landscape without it. If Halo didn’t create the “space Marines” genre, it certainly defined it, forever—and the fans made it a phenomenon. Your mother or neighbor may never have picked up a controller in their lives—but if they’ve heard of a single game, chances are it’s this one. Halo and its sequels have sold well over 40 million copies, and fans have explored its universe in novels, comics, and anime films.

"To thank fans everywhere as we celebrate the tenth anniversary of Halo and to whet your appetite for what’s to come in the next ten years, Microsoft Studios and 343 Industries are thrilled to present the game that started it all, remade and remastered using a decade’s worth of technological innovation—Halo: Combat Evolved Anniversary."

"At the heart of Halo remains John-117, known to fans the world over as the Master Chief. Abducted as a boy by the Office of Naval Intelligence, he’s a surviving subject of Dr. Catherine Halsey’s SPARTAN-II project, a cadre of genetically enhanced super-soldiers representing humanity’s best defense against the relentless alien collective known as the Covenant. With most of his fellow Spartans fallen in battle on Reach and elsewhere, the Master Chief is one of the only Spartans left. You’ve got to like our odds."

The Story So Far

"It’s the year 2552, and humanity is on the brink of extinction. After centuries of colonizing the galaxy via faster-than-light travel under the United Nations Space Command (UNSC), humans encountered an enemy that could end their very existence—a powerful alliance of alien species calling itself the Covenant. Motivated by religious fanaticism, this collective made its intentions brutally clear at first contact: eradicate humankind.

"The Human-Covenant War that ensued has now raged for decades. After a series of catastrophic defeats, the UNSC imposed extreme measures to protect humanity. Ships being followed by enemy forces are to jump blindly through slipspace, or even destroy themselves, rather than take the smallest chance of leading the Covenant to Earth.

"On the planet Reach, the UNSC battles a massive Covenant fleet bent on wiping out humanity’s last military stronghold. The cruiser Pillar of Autumn, carrying what is believed to be the last surviving Spartan and a critical AI construct, escapes into slipspace, hoping to buy humanity just a little more time…"

This section describes the different parts of your heads up display, as well as their functions.

"For multiplayer mode, set your connection type by selecting Network from any game lobby, and then choose Xbox LIVE, System Link, or Local. An Xbox LIVE® Gold Membership is required to search for or host games on Xbox LIVE."

"You can also access multiplayer maps in Halo: Combat Evolved Anniversary using the download code included on the card in your disc case. Once you’ve downloaded the maps, you can then use them via your Halo: Reach multiplayer experience alongside all the usual Halo: Reach hoppers, maps, and modes."

"In multiplayer, you can select loadouts, including starting armor ability, primary and secondary weapons, and type and number of grenades. Engage in multiplayer combat from any of three lobbies: Matchmaking, Firefight, and Custom Games."

"In Firefight, you and up to three friends engage Waves of Covenant invaders and accrue points with each kill. Look for medal score multipliers (headshots, grenade sticks, and more)."

"Create a private match and customize multiplayer games by changing game or players settings, or select game and map options, all in the Custom Game Lobby. When creating a game on Xbox LIVE, you can set privacy options from the Network menu and play custom games with people on your friends and recent players lists."

"View, edit, and take screenshots from films of solo and multiplayer games using a combination of camera angles. Players with an Xbox LIVE Gold Membership can also store films and screenshots online and share them with friends."

"Arrange objects, equipment, and hazards on any multiplayer map. Map variants can be created by you alone, or with friends on Xbox LIVE, system link, or a local Xbox 360 console."

"You can play the original Halo campaign in split-screen mode with a friend offline or over Xbox LIVE by starting your own lobby or joining your friend’s. You can invite a friend to play the campaign with you online via the Guide menu or the Lobby menu in-game."

"A popular Halo 2 innovation was skulls—hidden objects that change gameplay. Halo: Combat Evolved Anniversary adds this exciting element. Once collected, skulls can be activated or deactivated in the Campaign Lobby."

"Halo: Combat Evolved Anniversary comes packed with audio and visual enhancements, and if you own a 3-D TV, all of that is taken even further into a three-dimensional Halo experience—it’s Halo like you’ve literally never seen it before."

"To get a sense of just how enhanced this new Halo is, toggle at any time between original and remastered versions of the game using [Back Button]."

"A whole new list of achievements is now waiting for you in the original Halo campaign, to further enhance your gamerscore on Xbox LIVE."

"These features are enabled via a title update, which downloads automatically if you are signed in to Xbox LIVE. Players with a Kinect sensor can take advantage of a number of Kinect-enabled gesture and voice features, including the ability to select and analyze enemies and objects—unlocking vital intelligence about them in the Library—and to move among in-game menus. Refer to in-game information for a complete listing of features and their associated Kinect voice commands."

"Access a wealth of information about the Halo universe online anytime at Halo Waypoint—everything from fiction details to community-generated content to exclusive, never-before-seen shows and series. You can even access a comprehensive view of your campaign and multiplayer career, including statistics, across multiple Halo titles. Waypoint is your all-purpose destination for Halo news, games, intel, forums, community features, and merchandise, and you can reach it directly from the Main menu, your Xbox 360 Dashboard, your PC, or even your mobile device. Just point your internet-enabled browser to www.halowaypoint.com"

This section contains details about Xbox LIVE membership, availability, and family settings. It also includes information about the warranty for the game and contact information for Xbox support.

The back cover of the manual, this section includes a diagram demonstrating the default controls for the game on an Xbox 360 controller.