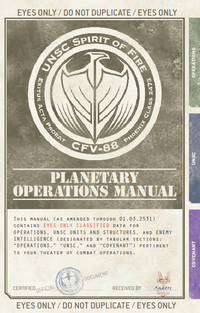 The Planetary Operations Manual is an official eyes-only document given by ONI, for operations regarding UNSC and Covenant units and structures during the Human-Covenant War.

A UNSC Spirit of Fire version of the manual, amended on January 3, 2531, was given to the personnel serving aboard the ship during the early years of the Human-Covenant War.

The Spirit of Fire version of the manual is split into three sections:

Commanding officer, UNSC Spirit of Fire CFV-88. A superior battle tactician, but a better logistics officer. He refused command of the UNSC destroyer Prophecy in favor of the colonization vessel, Spirit of Fire. Upon the outbreak of the Covenant War, Cutter was handpicked by Admiral Preston Cole to helm the Spirit of Fire in her new role as center of repair, supply, and forward deployment operations for Battle Group D.

The “smart A.I.” aboard Spirit of Fire, Serina is capable of coordinating concurrent repair and refit operations of twelve UNSC ships of the line as well as organizing the deployment of hundreds of groundside assets among dozens of different drop zones. Her sense of humor is dry and sardonic. She has an understated fascination with human relationships and a theoretical interest in chocolate.

Sgt. John Forge’s service record speaks plainly: decorated numerous times for valor and gallantry on the battlefield, but just as many counts for insubordination, conduct unbecoming, and striking a superior officer. He has been promoted five times and demoted thrice. The men in his squad say: “He’s the guy you want in the foxhole next to yours… but you’d never introduce him to your sister.”

With PhD’s in biology, anthropology, and psychology, Prof. Anders is the preeminent expert in theoretical xeno-biopsychology. She has been invited by the Office of Naval Intelligence (ONI) to join their elite research team to investigate possible clues regarding the aliens’ xenophobic behavior on the UNSC colony world, Harvest. Anders has an IQ of 180 and was the student of Dr. Catherine Halsey, progenitor of the SPARTAN II program.

Little is known of the Covenant who bears this title. Some theorize that the Arbiter is a battle leader equivalent to a UNSC four-star general. Unlike UNSC generals, however, the Arbiter personally leads military actions, believing anything less is dishonorable. The Arbiter (of which there can be only one at any given time) apparently also has a socioreligious function that extends beyond military protocols.

This version was used by Ellen Anders as she made a few notes on her copy.[1] Anders added the following notes into the manual.

Real World Sections of the manual[edit]

This document is the game manual included with Halo Wars.[1]