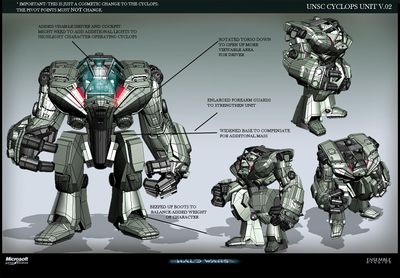 After the Mark 1s were found to be impossible to control they were decommissioned with the majority of them being thrown into the titanium mines on Reach. Dr. Halsey went on to start Project ORION which led to the Spartan Mjolnir armor development program in 2491. This came under the Naval Special Warfare division.

Bitten by the failure of the first program, and suspicious of ONI, the Marine Corp under the UNSC Marine Special Operations division started their own power suit research division. Their other research program, ODST, was looking shaky and they needed a form of shock deployment troop to fight the continuing rebel uprisings throughout the outer colonies and sometimes in harsh environments such as the Eridanus Asteroid Belt where Robert Watts was holed up after the rebels fled to the asteroid belt following Operation TREBUCHET in 2513.

These power suits, often called “coffins” by those who had to wear them, initially did well in field tests, but severe power problems, issues with the propulsion systems, and the success of the ODST program led to them being mothballed. Most of the power suits were assigned to support vessels were they were deployed alongside the base pods to construct the buildings once they were on the ground. The power problem was eventually solved, directly as a side effect of Project ORION, and the suits were updated, but the deployment of Spartan III soldiers in 2536 took them out of operation completely and they were mostly scrapped alongside the Mark 1s on Reach.