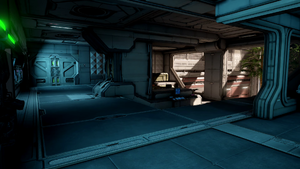 Security R-01 is a generic UNSC term for one of the security stations on the port side of an Orbital Defense Platform. It overlooks Commons R-01.[1]

Cairo Station Security R-01 was a portside security station of Cairo Station closest to the bridge. During the Battle of Earth, Cairo Station's defenders set up an M247 machine gun in Security R-01, but the gunner was killed shortly after the battle begun. The remaining Marines were pinned down in Commons R-01 below by Sangheili and Unggoy. Fortunately, John-117 appeared and used the machine gun to repulse the invaders, saving the surviving Marines.[1]