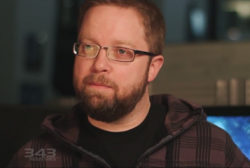 Kevin Grace is a former managing editor for 343 Industries and former franchise manager for the Halo franchise from 2009 to 2018.[1][2][3] He worked closely with internal and external talent crafting many Halo universe titles, including books, comics, animation and games. In addition, he has partaken in the editing of Halo 3, Halo 3: ODST and a variety of other games published by Microsoft Game Studios. He comes from a Midwestern attorney upbringing and now lives in Seattle, Washington with his wife Karen.[4]

He wrote the short story The Return in Halo: Evolutions, most of the content in the Halo Combat Evolved Anniversary terminals, [5] Halo 2 Anniversary terminals,[3] and Anarosa in Halo: Fractures.[6] He was the lead writer and narrative designer for Halo Wars 2 and its DLC.[7][3] He also contributed to Halo Infinite as narrative designer via character creation, mission scripting, and world building.[3]