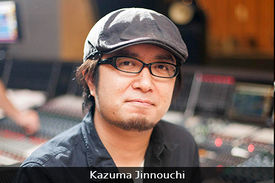 Kazuma Jinnouchi as he appears on the Halo 4 Soundtrack's official site.

Kazuma Jinnouchi is a Japanese music composer, and a former composer and supervisor at 343 Industries.[1]

He then moved to the United States and, in July 2011, began working with 343 Industries on Halo 4, along with composer Neil Davidge.[3] However, contrary to Davidge, Jinnouchi is an integral part of the studio's audio team. He composed several tracks for Halo 4: only one of his tracks was featured in Volume 1 of the Halo 4: Original Soundtrack, but nine were present in Volume 2. He also composed the music featured in the Halo Xbox One E3 announcement trailer,[4] and went on to compose most of the Halo 5: Guardians soundtrack.[5][6]

Jinnouchi also composed some of the soundtrack of Halo Infinite, but on July 13, 2018 he announced that he had left 343 Industries to become a freelancer composer.[7]