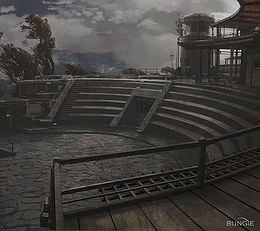 The menu background image for Theater in Halo: Reach.

Theater was a feature first introduced in Halo 3 that allowed players to review their gameplay footage in real-time. Due to the usefulness and popularity of this feature, it has been a staple in Halo first-person shooter titles ever since its first inclusion. After Halo 3, it has appeared in Halo 3: ODST, Halo: Reach, Halo 4, Halo: The Master Chief Collection, Halo 5: Guardians, and Halo Infinite.

Every time a player plays a game of campaign or multiplayer, the game will automatically be saved into a list of up to twenty-five recent films, which players can watch at their leisure. Players have a number of abilities while in-film; play, pause, fast-forward, take screenshot, rewind and record film clip, however the latter two are only available in multiplayer clips in Halo 3 and Halo 3: ODST, due to loading issues in campaign. Players can save up to one-hundred saved films in Halo 3. Film clips are shorter, recorded sections of a film, only usable in Halo 3 and Halo: Reach, not in Halo 3: ODST.

Theater is also featured in Halo: Reach and is improved as "Theater 2.0", with the ability to rewind films in campaign and Firefight. In Halo: Reach, a player can save one thousand items of each file type, including clips, films, maps, and gametypes.

In both Halo 5: Guardians and Halo Infinite, Theatre is limited to multiplayer.

Pressing "Y" while watching a film will enable players to roam around the space in real-time. Despite popular belief, saved films are only collections of game information readable only through the Xbox 360, thus cannot record onto a PC without the use of Bungie Pro film rendering, or a video capture card. Screenshots can be saved to a computer as an actual image if posted from a file share on Halowaypoint.com. This is only relevant to Halo: Reach and Halo 4, as Halo 3 file support was terminated during the move to 343 Industries.