Oh. Thanks! As a token of my appreciation, here's my userbox:

Ahh, it is completely outstanding in every way possible, Manticore. I don't know how I lived life before now. But I just got home for christmas break, so I'll be around a lot more the next few weeks probably...college has diminished my activity on Halopedia lately...

Haha, I know what you mean. School is so lame compared to uni. Things have been really good lately. I've finished uni for the year, so I've been really active lately around Wikia, probably too active. :P

No one ever said that. It makes it easier for us to be able to track each one of their contributions, particularly if the IP address turns out to be a vandal. --EDFile:ArmyROTC.gif|15 19:45, 23 November 2007 (UTC)

Wow, thanks for the help. Hopefully everyone will start using them now, I made them after the Beta but haven't seen them in use by anyone else. Thanks, simon rjh 12:18, 24 November 2007 (UTC)

Not sure what you've done while sorting out the categories, but now </div><noinclude> appears next to the template! User:Simon rjh/Userboxes#Halo 3 Multiplayer Ranks I'm not sure how to fix this, so I'll let you do it for fear of making it worse. :) Thanks, simon rjh 10:48, 26 November 2007 (UTC)

I'll put a link to them on the Member List page on the UNSC of Halopedia site.

Have a good day!

Very true. Does the UoH have a Forum? I couldnt think of anywhere else to put a nominations place, except in the service medal talk page...--EDFile:ArmyROTC.gif|15 01:00, 29 November 2007 (UTC)

I was wondering if you or any of the other Admins have thought this over yet. The previous message with most of the details is titled "Heys I Gots Ideas!" if you have not yet read it. Please tell me what you think at your earliest convienence. BTW sorry to be a pest, but I just am trying to find out as the community is more focused on other forum topics than this. WRAITH 21:59, 28 November 2007 (UTC)

What youre proposing sounds almost like a clan...we tried to organize one awhile back, but there really wasnt enough support to do so. --EDFile:ArmyROTC.gif|15 01:01, 29 November 2007 (UTC)

Why did you redirect the 1st Marine Battalion page to the M-EDF 9/21/1' page?

It's a perfectly alright article in my opinion. I mean yeah, all we have on it is a small small mention, but thats enough.

Have a good day!

I was thinking about that just now actually. M-EDF 9/21/1 and the 1st Battalion are two names for the same unit, so I figured one should redirect to the other, and since M-EDF 9/21/1 was specifically names while "1st Marine Battalion" wasn't, I figured it would be a better idea. --EDFile:ArmyROTC.gif|15 01:30, 29 November 2007 (UTC)

P.S., I sent you a friend request on XBL, my Gamertag is SpartanCharger. Peace.

I'm not sure where or even if I remember reading that somewhere. I think I just put that there for speculation, or maybe I just assumed the majority of the Spartan-II's came from Eridanus II. Now that you mention it, I just finished reading Halo:FoR and FS and don't recall seeing any mention of Eridanus II. I'll continue checking, but in the mean time, you or I will fix that infobox. Peace. I'm On Fire! File:Unfreakinbelievable-2.jpg|30 FeedTheFlame WatchMySmoke 21:18, 6 December 2007 (UTC) :Perhaps this is where I got that information from, [1] User:CaptJim put that info on the Eridanus II page. Peace. I'm On Fire! File:Unfreakinbelievable-2.jpg|30 FeedTheFlame WatchMySmoke 21:21, 6 December 2007 (UTC)

I actually would, except I'm perpetually lazy, and it is an extremely tedious process. I will resort to saying "I'll get around to it sometime" -- perhaps over this weekend? How're finals looking? How's studying been? :P

Hah hah yeah it is, and you get lots of messages, I see. I'd do it for you, but its not that important... And as for exams, I actually finished them up before thanksgiving. OU has this really wierd schedule where I get a seven week winter break from Thanksgiving until New Years, so I've had more time to be on here. But, they were good. All A's and B's. Good luck on yours! --EDFile:ArmyROTC.gif|15 00:36, 8 December 2007 (UTC)

This page has some information on commands, but the basic ones you need are:

So, if you want to ban "Manticore", you'd type /mode #halopedia +b Manticore!*@*

Where 12345678 is the alphanumeric string that is the users hex IP address.

If you've got any questions or need to know more, you can leave me a message or email. :)

You didn't do anything wrong, I was just welcoming you to Halopedia and inviting you go create an account. --EDFile:ArmyROTC.gif|15 01:02, 13 December 2007 (UTC)

How did you get this picture: [2] onto Halopedia, becuase when ever I try to save that type of image from my service record it wont work it just says set as background. What's your secret to making it a jpg image?

All I do is open the service record, hit "printscreen" and use paintbrush to cut that image out. Here, I uploaded your current one for you:

As the uploader, his name is on the file history. As I understood, we don't allow people to put their names on any mainspace things--articles, images, templates, whatever, if it's not a talk page, you don't credit yourself. If you want to change that, please email the Administration so we can discuss it. --NOTASTAFF GPT(talk)(eating) 22:59, 19 December 2007 (UTC)

Its part of the legal nonsense we have to fulfill. Though he doesn't use a disclaimer template, as the photographer of the work, he does have to officially release it to the public, and from what I understand, the upload log doesn't count. And so, about 95% of our images are currently copyright violations because they neither aknowledge Bungie for creating the work nor the creators of any images. --EDFile:ArmyROTC.gif|15 23:33, 19 December 2007 (UTC)

OK. You can just reupload another image under the same name, and save yourself the hassle of having to change the images and stuff. --EDFile:ArmyROTC.gif|15 19:36, 20 December 2007 (UTC)

I dunno if you're just deleting all images or what... but if you are, could you make sure not to delete any that look like they've got at least a fair chance of being used in the future? Kthx. =D --NOTASTAFF GPT(talk)(eating) 23:44, 23 December 2007 (UTC)

I'm just going through the unused image and removing the ones that arent being used...most of them are duplicates, user images, or just low quality. And sorry about messing up the admin skin, I keep changing that without meaning to. --EDFile:ArmyROTC.gif|15 23:45, 23 December 2007 (UTC)

Was just bring to your attention the Fan Art Committee (FAC). I was speaking to users @ the IRC, and I was critiquing a particular article when I noticed the main image was fan art. I asked why they'd placed it there and the response was it was approved by the FAC.

Sir, with respect -- I think no fan material in any form should be permitted on Halopedia. Halopedia is a place for canonical material, not for fan material. I ask if the FAC may be disbanded and fan art be immediately removed.

Man, I can say with all honesty that I wholeheartedly agree with you- I want 0 non-canon images on Halopedia. But as it is a committee, I often get outvoted on these issues. I would hate to destroy the group consensus-based nature of the wiki, though. --EDFile:ArmyROTC.gif|15 05:22, 25 December 2007 (UTC)

did you even read the article? it said its on halo ce map downflow, that exists. i just looked at the trivia of some things so can i put it in the scarab trivia?

btw how do you make yr signature like urs is the best i cn do is this Halochamp i mean you have a emblim & stuff on yours! if its possible i wanna use this pic: 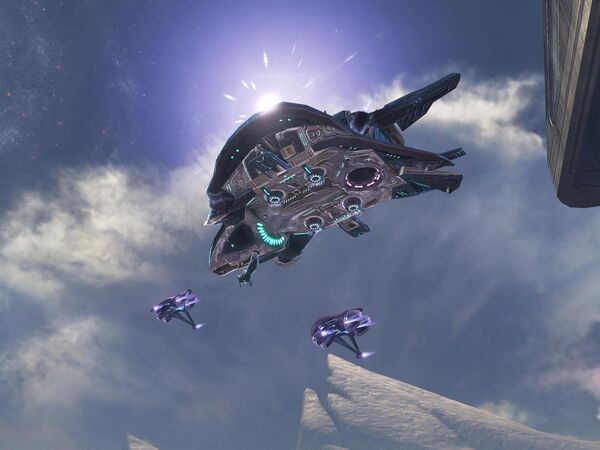