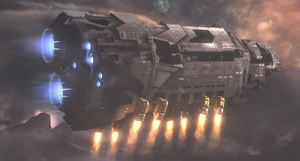 The UNSC Pillar of Autumn maneuvering in atmosphere with atmospheric rocket pods.

R7 thrust couplings are a form of propulsion system used by the UNSC for the purposes of lifting spacecraft out of atmosphere and into orbit. Attached to hardpoints on the underside of the vessel, they are commonly used by smaller craft such as corvettes or frigates when entering and leaving docking facilities on a planetary surface.[1] When taking off, the booster packages are typically discarded once the craft has achieved enough lift to leave the atmosphere on its own.[2]

Non-atmosphere spacecraft such as Halcyon-class light cruisers are also capable of limited atmospheric operation if enough thrust couplings are affixed to their hull, although their maneuverability is extremely limited; Lieutenant Commander Gail Purdy noted that "it'd be like flying a brick with bottle rockets."[1] Regardless, during the Fall of Reach, the UNSC Pillar of Autumn successfully used eight of these to land onto and lift off a drydock at the Asźod ship breaking yards.[2] During her escape, the Autumn executed a class-L flash-dock, a restricted atmospheric maneuver for a ship of that size.[3]