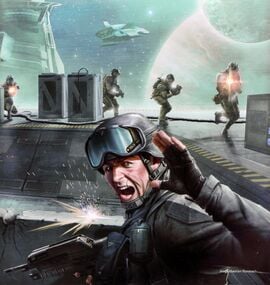 The Interplanetary War was period of armed conflict waged throughout the Sol system between 2164 and 2170, less than a century after humanity founded its first extraterrestrial colonies. The war was fought by the United Nations, the neo-communist Koslovics, and the fascist Frieden. Following the UN's Mars Campaign and success of their new Marine Corps, the United Nations Space Command was established. Ultimately, the UNSC won the war, gaining military and police jurisdiction over all colonial territories.

How to add an item[edit]

To add an item you need to use the following code. <option> {{Halopedia:Main Page/Random/Layout|MonthYear|Name|File:|Description}} </option>

And replace the following words with the file name