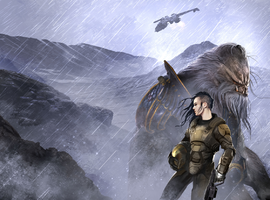 Operation: RETRIBUTION was an Office of Naval Intelligence operation undertaken by Blue Team and the Ferret team lead by Veta Lopis in December of 2553. Lopis' team had been training at the Mill and elsewhere since its formation just months prior, but RETRIBUTION was the first true mission given to the joint Spartan and civilian unit. Veta Lopis and the two groups of Spartans were assisted by the crew of the UNSC Silent Joe, a Sahara-class prowler. The operation was conceived as a response to the murder of Vice Admiral Graselyn Tuwa and the kidnapping of three of her family members.