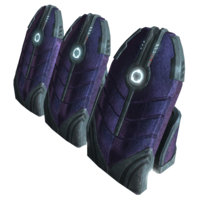 One notable type of defense barrier is the Guardian Triptych, comprising a set of three armored panels. The panels of the Triptychs are effective at not only these basic functions, but also contain systems which broadcast subsonic signals that deter local wildlife from approaching and have a soothing effect on any nearby Yanme'e.[1]